I'm a big fighting game fan, so when I see a new mobile game that truly attempts to bring the thrill and mindgames of a traditional fighting game to a portable, you know I pay attention.

It's for this reason I've been playing Shadow Fight Arena, and today I'm here to help you get those wins and adjust to playing a fighting game on mobile. 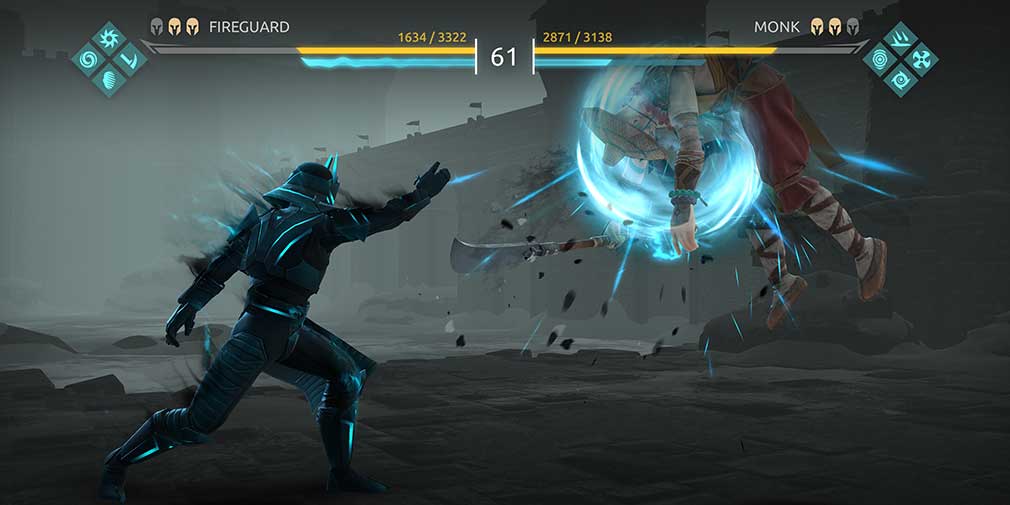 Shadow Fight Arena is smart because it takes its time, and offers a slightly slower paced game in exchange for perfect mobile compatibility.

In Shadow Fight Arena you'll truly be able to take on opponents with mindgames once you understand the mechanics, and this guide is here to help you do exactly that. Read on for everything you need to know to play Shadow Fight Arena like a pro.

Shadow Fight Arena is a slower paced fighting game than the ones you might be used to. Here you won't be doing any incredible combos or juggles, but instead you'll be patiently waiting and gauging your opponent before making a move. It's closer to Samurai Shodown than Street Fighter.

Spacing and pacing is incredibly important. You block in Shadow Fight Arena simply by not attacking - being neutral or walking is a defensive stance, and although the opponent can grab, it doesn't stop you from simply walking forward through most of their attacks.

Jumps are also incredibly rare in Shadow Fight Arena - the controls for a jumping attack being slightly finicky - and this can make them difficult to both pull off, and anti-air. Watch for them, and be prepared to block.

Patience is a virtue

If you just tap your attack buttons, you will never block, and you will always be open to the opponent's attacks. Bad, especially when your opponent can simply move back and use a projectile.

But just wait for your moment and strike - after your opponent has unleashed a full combo on you, just wait and if they're close, grab, if they're at range, use a neutral attack or kick. These attacks are fastest, and are most likely to get through the defences of a raging opponent.

You can also roll forward and back by holding down-forward or down-back, these will go under projectiles, making them a great spacing tool. You can move in under a projectile, and strike. Though the execution may require quite the read.

If your opponent is reckless, you can be a bit reckless too. Knock them down with a solid combo, roll in (no need if they're against the wall) and then just unleash neutral combos - fast and deadly.

Some opponents just can't handle rushdown in this game, and if you use it to your advantage, you'll decimate people online.

Levelling up and special abilities

This fighter isn't actually all about building your base skills, there's a gacha element too. Win games, earn chests, level up your warriors, and that's when the game can get unpredictable, but interesting.

You can level up your warriors and assign them special abilities, some of them incredibly strong, such as seconds of invincibility whenever you get hit by a projectile.

If you level up your warriors fast you'll be able to unlock abilities your opponents just aren't ready for, so make sure to read the details for each upgrade in depth before deciding.

As Pocket Gamer LaunchPad 2 comes to a close, let's reflect on three amazing days of exclusives and streams