Described by the developer as a Puzzle-Pixel-Shooter

Pico Hero is an action game from developer Cappy1 Games that they describe as being a Puzzle-Pixel-Shooter that sees players battling their way through levels to save their animal friends. It's available now for both iOS and Android.

The game starts with some soldiers interrupting Pico's day where he's hanging out with all his animal pals. These intruders promptly fire a rocket at a nearby tree and swiftly steal all of his animals. Pretty rude, that's for sure. So he'll have to take up arms and get them back. 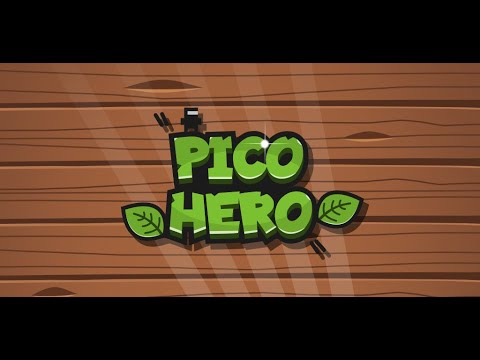 The controls themselves are relatively simple. All you have to do is swipe and drag in different directions to determine where Pico will walk. He'll automatically fire any guns that you pick up when you're in range of an enemy or destructible object. That leaves you with the job of dodging enemy bullets whilst staying in range to fire your own.

In between gunning down the people who unceremoniously pinched your pigs, dogs and chickens you'll be planting trees, collecting coins and solving puzzles. There will be the odd boss battle to overcome as well that should really put your bullet dodging skills to the test. There are also training levels too if you want to get to grips with the various weapons before using them in the main stages.

There are over 100 levels available in Pico Hero that are each represented by cards. Once you've blasted your way through enough of those you can also create your own stages using the level editor. Here you'll be able to choose everything from the types of tiles the level is made up of down to how much ammo each weapon pick up can have.

Pico Hero is available now over on the App Store and Google Play. It's a free-to-play game with in-app purchases.

Enjoy action games? Here are 25 of the best available for Android

How to play Golf Clash. Tips to help you hit good, clean shots in the golf duelling phenomenon