Mario Kart Tour's multiplayer update has been a long time coming. At launch, the game felt incomplete without the option to race against your pals. That combined with the lack of control options and Gold Pass backlash meant that it didn't quite get off to the best start in life.

That said, it's improved considerably since launch, receiving regular content drops and refinements over time. The addition of multiplayer is another step in its journey to hopefully becoming a worthy entry in the Mario Kart series.

#MarioKartTour multiplayer is here! Let's celebrate with a retweet campaign. If this tweet and the corresponding one on the Japanese account reach a combined 30,000 RTs, all current players will be gifted 30 rubies and an in-game badge! Watch the video for more info. pic.twitter.com/z4pVpcjkn3 — Mario Kart Tour (@mariokarttourEN) March 9, 2020

There are a handful of modes to get stuck into, including standard and Gold Pass races. In some cases, you'll be able to pick the rules of the race, while other modes require you to stick to a rotating set of rules that change on a daily basis.

To celebrate the launch, there's a Twitter retweet campaign currently going on. It's the tweet embedded above that you're going to have to share around, and retweets across both the @mariokarttourEN and @mariokarttourJP accounts will count towards the total number. 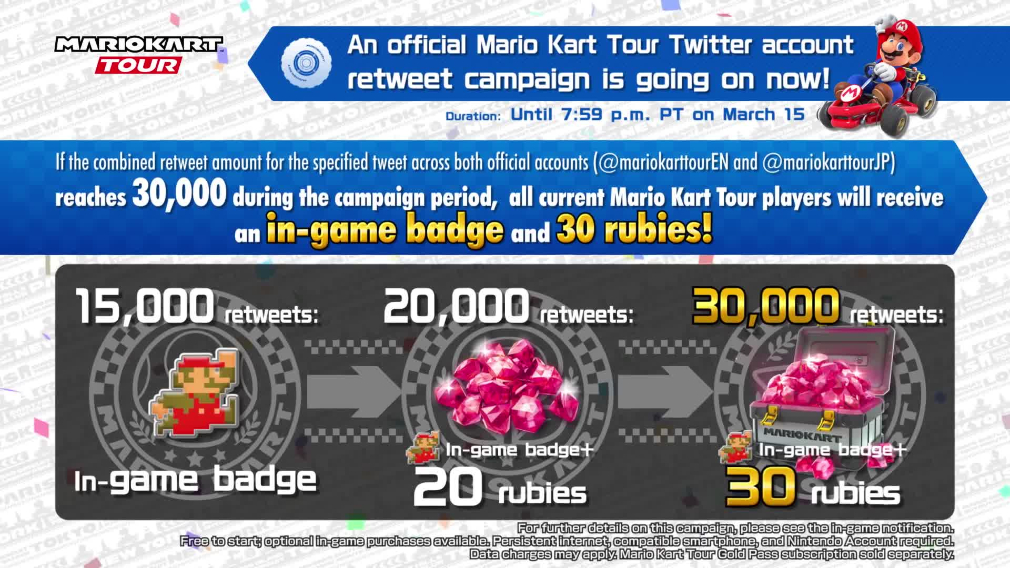 Spreading word of the multiplayer update could help get those who bounced off at launch back on board, which is something the official MK Tour account is actively pushing by explaining how to get your progress back if you've uninstalled the game. It's as simple as redownloading the game and connecting to the My Nintendo Account that you originally linked.

If you're in need of some friends to play with, we've got over 23,000 friend codes for you to add until your list is full.

Mario Kart Tour is available for download now as a free-to-play title from both the App Store and Google Play.

Searching for some quality racing games? Here are the top 25 for iPhone and iPad