Despite that though, the series has enjoyed enough success in Japan that the mobile game has earned itself two seasons of anime, and now, a fighting game by veteran game designers Arc System Works. Clearly, if there was ever a time to get into Granblue Fantasy, it is now. This is exactly why we're going to give you a rundown of everything you need to know about Granblue Fantasy so you can jump into the mobile game, the anime, or the upcoming fighter. 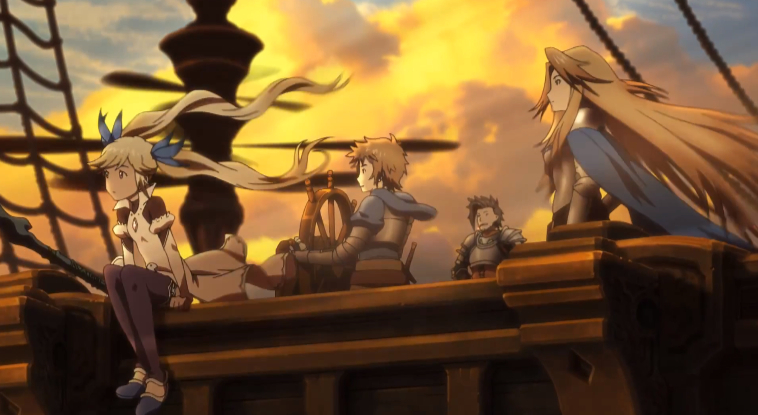 What is Granblue Fantasy?

Granblue Fantasy is a gacha RPG developed by Cygames, with Final Fantasy veterans like Nobuo Uematsu and Hideo Minaba working on the soundtrack and character designs respectively. The story follows Gran (or Djeeta, the name of the female protagonist) as you run into a mysterious girl named Lyria. When you encounter a life-threatening incident, Lyria's power bonds to your soul, saving your life and making the two of you inseparable. Good news if you like living, bad news if you want to deal with the Empire, who wants to kidnap Lyria.

From there you meet several new companions, rebuild an airship, and travel Granblue Fantasy's world as you collect more gacha characters for your team, and progress through the story. Granblue Fantasy is actually a fairly old game at this point, originally released in March 2014, but it still has a strong fanbase thanks to continual updates and a story that fans love. The game still has a beautiful aesthetic, though it has to be admitted, the older design of the game means very little of the screen is used on modern phones, and moving between menus feels slow, almost like moving through pages on a web browser. It is a product of its time, but despite that, it still manages to look striking and feel charming to play.

It all follows a tried-and-tested gacha RPG formula, but with one of the strongest aesthetic designs and most endearing characters and story of any gacha RPG. This doesn't feel phoned-in like many gacha RPGs do, instead, it's a proper JRPG story, in a gacha format, with everything good and bad that comes with that combination. While playing the game, it's easy to see why there are still huge fans, even with more modern gacha RPGs available. This game has the same level of polish you'd expect from Cygames with their titles like Dragalia Lost, and that makes it fairly outstanding when put against other gacha RPGs by default.

Despite being nearly six years removed from the time it launched, Granblue Fantasy manages to make a compelling case. It is a gacha RPG with a high enough mark of quality to make it easily recommendable over other gacha RPGs on the market, and that's even keeping in mind the mild pain you'll have to go through in order to install it. It's for these reasons that Granblue Fantasy earned itself an anime adaptation that follows the story of the game, the first season of which was even dubbed in English for overseas audiences. All of this without even an official release on the App Store and Google Play Store outside of Japan. Which brings us to…

How to play Granblue Fantasy

We've mentioned several times that this game isn't officially available outside of Japan, so you might be wondering how exactly you're supposed to play it. Well, Cygames did originally intend to officially release the game overseas, but those plans were scrapped when they realised how easily players overseas could just download .apk files for their Android device, or change the region of their iOS accounts temporarily.

Since they already had overseas players who were struggling along with the Japanese language version, they simply decided to include English language as an option when starting up the game. This means you can either find yourself an .apk file for your Android device, or change the region of your iOS account to Japan, download the game, and you'll soon see the "Set Language" option on the main menu. Though, you may need to fumble through making a guest account to start the game before that…

Once you've set the language, everything in the game is translated, so you'll never know it was a foreign version of the game. Aside from one caveat - the screens which ask you to confirm spends of premium currency are still in Japanese and might confuse you. Avoid them if you're worried you don't understand them with the Back button.

Where to start? Mobile game, anime, or fighting game?

Granblue Fantasy started life as the gacha mobile JRPG we've talked so much about, but in the modern-day you can also enjoy Granblue Fantasy through the anime series, or the upcoming fighting game, and you might be wondering which is best for you.

Well, here on Pocket Gamer, we would of course recommend the mobile game. It's a fantastic take on the gacha RPG formula, with beautiful music and a charming hand-drawn aesthetic.

But having said that, if you just want a casual, passive way to enjoy and understand the story of Granblue Fantasy, the anime series is a perfectly acceptable way to do that while unwinding.

And then there's Granblue Fantasy Versus, the Arc System Works fighting game. It is already available overseas with full English language settings, but if you don't know who the characters of Granblue Fantasy are, it might be a bit confusing, as it takes place after the story of the game. Having said that, if you don't care much about the storyline and are in fighters for the action, it's certainly a solid choice.