App Army Assemble: Woofball Manager - is its bark worse than its bite?

Woofball Manager promises a mixture of Reigns' choice system and football management. But crucially, on top of that, it offers a ludicrous amount of dog puns. Now I love a good pun as much as the next person, but there's got to a little more to a game than that. So we asked our App Army to try out Woofball Manager and give us their thoughts.

Well, I’ve tried Woofball Manager. It’s a multiple-choice card game that ultimately determines the fate of your woof team. Fans of football games might find some pleasure in this game for a few minutes but it’s not something you will remember in a month. Woofball gets a 2 from me.

I’m a great fan of Reigns and was hoping this would be good as it uses a similar play mechanic. However I don’t feel it suits a football managing game, it’s just not that fun to play and winning a match feels more like sheer luck than any skill in the choices you make.

Graphics are ok but the sound is sparse. Sadly it’s a rather forgettable game.

Very simple strategy decision-making game, with the unique idea of a dog managing a football team. A “woofball” team. And yeah the idea struck me as silly. But as I’ve never had the best of luck with these kinds of games (think Reigns, Reigns: Game of Thrones and the sci-fi themed Final Frontier).

I decided to give it a try to see if my luck will change. And maybe this version is more forgiving than others, or maybe my luck has turned. In any case, I survived the first season, so maybe I’ll push ahead. The game itself consists of cute cartoon dogs mostly and simple choices to be made. The simple controls, dragging the card left or right to make your choice work fine. It asks very little of your device and therefore doesn’t disappoint.

The choices don’t make for a very interesting storyline. But then you probably wouldn’t expect much drama from this simple game. It’s a cute 99 cent strategy game that seems geared towards kids, and will most likely appeal to fans of the genre. 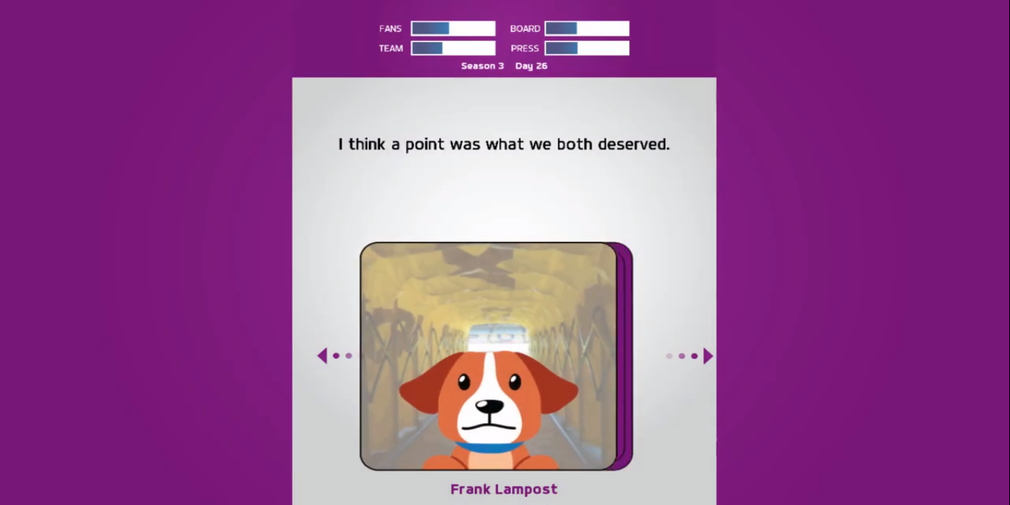 A tricky one this. It's a likeable swipe to choose football management game involving dogs that seem happy enough to ignore nearly everything you do. You spend the 1st season escaping relegation only to win every match you can and still end up fighting relegation. Also, the press will hate you whatever you say and you can't tell if your decisions will help or hurt fans, press, board or team only that your decision will affect some of them.

A nice enough idea that sadly doesn't quite hit.

I’m not a fan of Reigns but football management games definitely appeal to me. Unfortunately, this game is far too simplistic with correct choices seeming to come down to luck. Most of the time you can just skim read the choices mainly paying attention to which of the influence bars it will impact.

Apart from the pun in the title, the fact that the characters were dogs didn’t really seem to come into it and nothing really kept me engaged, I kind of expected a bit more humour to be shown. I would recommend sticking to either one of the other Reigns type games or a decent mobile football manager. Not recommended.

The game felt all too familiar having played my way through the reigns series.

You have to manage each area of your ‘woofball’ club by making decisions presented to you by various dogs. The concept is charming but for me, lacks something that reigns has, be it graphically or just in the storytelling capacity. Those that can’t get into a real football manager game due to the in-depth nature of them might prefer something like this which requires 2 choices each turn.

However, for me, I was never really hooked. It always felt a little too basic and I found myself just going back to reigns as the story aspect of Woofball couldn’t compete.

Like most have said if you’ve played the Reigns game you pretty much get the gist of what it’s about. Swipe left or right to make decisions and affect the game's outcome. In this case, though I was not invested in the outcome of those decisions as it seemed too simplistic and rather I ended up mostly swiping any direction to advance the game till its end.

There some “doggie” humour here and there but I was mostly not amused by it. It might also be because I’m not into sports sims but either way, not a game I’d be rushing to play again anytime soon

I used to love text-based games in the past, but not anymore. I launched Woofball Manager as a diligent student, but in no more than 5 minutes got completely bored. Yeah, it boasts a plethora of dog puns and images of cute doggies, but one should be probably a die-hard fan of football and/or our four-legged friends to properly enjoy this game.

Sadly, I am none of the above and since recent times prefer games where you jump straight into the action without any need to do the tedious reading exercise. Supposedly, WM is inspired by the Reigns series of games, which was a huge success amongst even non-gaming crowd, but that was an original idea, which has definitely lost a fair share of its shine and appeal since then.

My advice as a certified language professional: if you feel that literary itch, go read the acclaimed works of literature. In case you are starving for something to play, make a wise choice in favour of some premium game with an original idea and flawless execution. But never ever opt for the things that do not go well together or have already been used multiple times before. 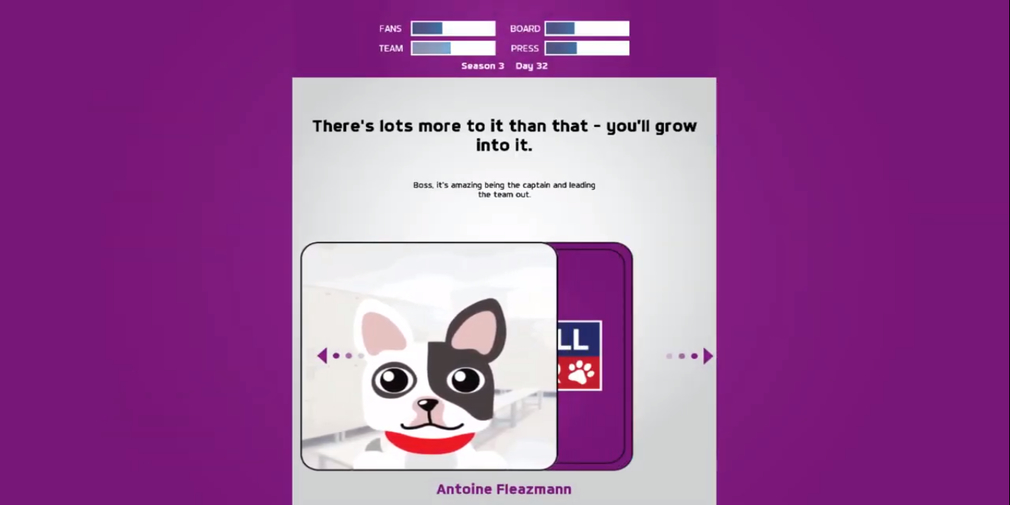 If you enjoy the Swipe to choose, binary choice adventure games popularized by Reigns, and you enjoy Football Simulators, and you enjoy the Punny Shenanigans of Cat Quest and Holy Potatoes. You will find in Woofball manager something which appeals to you on each of those levels and yet falls short of Its inspirations.

The sound design is minimal, and the gameplay is a stripped-down version of the original reigns with a football aesthetic and nomenclature. The action sequences from reigns like running in the dark, or fighting. Here involves making attack/defence decisions, four per match, I am unsure how to do this strategically as there are no real cues for which play is relevant, only reports of success or failure. The strongest point of Woofball Manager is its dog puns. The game is crammed with them, all those dog puns for a dollar, it’s value.

I have little to no interest in football and this game hasn’t changed my mind. I knew there was going to be a lot of reading, having played similar games, but this was too simple with no real feeling of achievement. The multiple choices were not interesting enough and the story had no real excitement, while the basic drawings of cute animals gave the impression that the game was meant for a much younger player.

It would have been great to have had a little animation here and there, but as the format was, I easily got bored. The game is probably best suited as a very limited time filler. Not a game for me I’m afraid.