Automachef has come closer to breaking me than any game I can think of in recent memory. It serves up such a staggering amount of freedom and number of options that I often grew to feel like my best, most well-planned efforts might never be good enough. Automachef is also a very funny, oddly accessible and forgiving game, one that might ask you to think like a robot but which certainly encourages creative solutions to its unwavering challenge.

The goal in every level is to entirely automate the process of preparing and delivering a variety of increasingly-complex dishes with maximum efficiency. You’re given a simple recipe to begin with, and you’ll have to deal with an onslaught of customers who arrive and order from the pre-determined menu.

You have machines that dispense the raw ingredients, say a patty or burger bun; programmable robotic arms that can automatically pick up and move whichever ingredients you tell them to; grills for cooking your patties or hot dogs; food processors to chop vegetables and cheese; and conveyor belts on which to transport everything around.

You have a frankly staggering amount of control over all of this, with everything needing to be manually tweaked, from the speed of individual conveyor belts to the dividing up of raw and cooked ingredients.

Likewise, order readers need to be programmed to tell specific pieces of equipment when to start up or dispense an item depending on what order comes through when. As you can imagine, things get exceedingly complicated in no time at all.

Every machine you install will bump up your energy consumption. This is a problem considering that all levels come with their own pre-determined goals, one of which is to not exceed a certain amount of power. To hit maximum efficiency, you’ll also have to minimise wastage by making sure that ingredients aren’t being backed up by a surplus of buns or meat. Space is another huge concern, with each level having its own size of kitchen for you to work around. 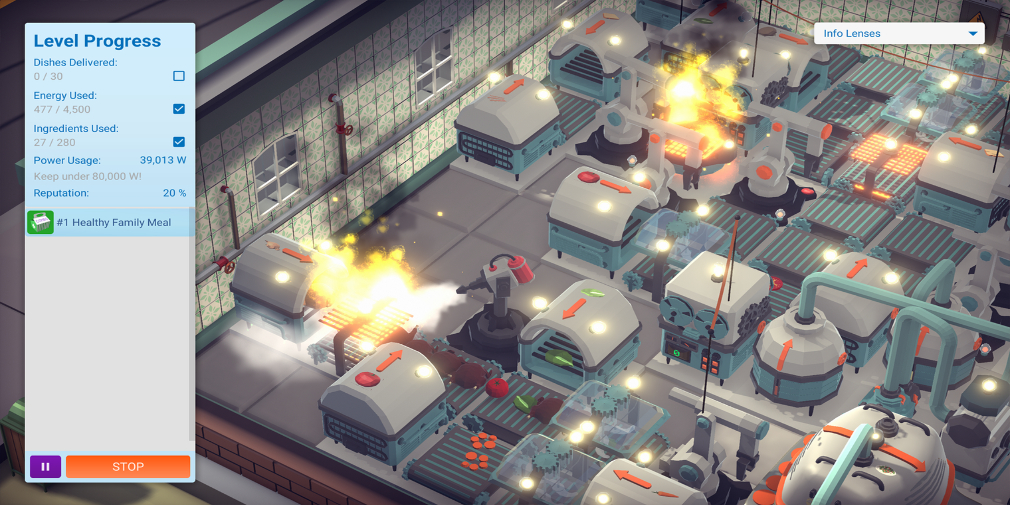 Outside of the main campaign, there’s a contract mode where you’re tasked with starting up a kitchen building business that delivers specific kitchens to order, as well as a sort of sandbox mode which allows you to mess around with unlimited cash and energy to design whatever sort of mad-scientist creations your heart desires.

Regardless of the mode, it feels like the sort of thing you really ought to have studied at university for 4 years to be moderately competent at – but then it hits you, it all just clicks, and by the grace of God you win with a glorious 62% efficiency rating.

But wait… that’s a bit pants. Maybe you should go back and do it all again? My impossibly irksome brain whines to me. And so I return not quite to square one but to a position that feels like it may as well be.

In these moments, you’ll likely rerun your interconnected machine several times to try and visually decipher what’s going wrong and where. You’re constantly using old knowledge to speed up progress, and there’s even the option to save blueprints for later use. This saves a huge amount of time and energy while also giving you a more permanent reward for your creativity. 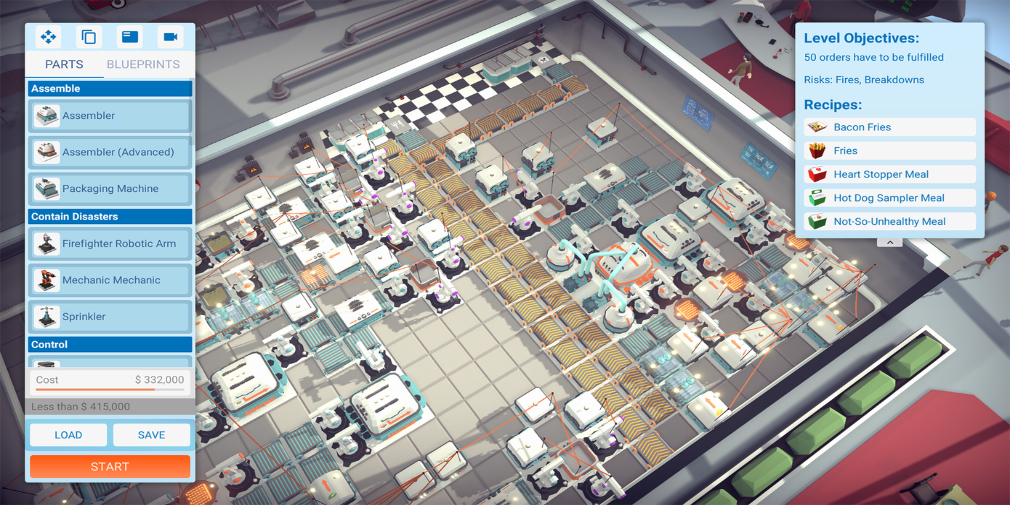 Strangely, it’s an extremely forgiving game, allowing you to test your fire hazard as many times as you like and easily undo any mistakes or tweak any oversights. And yet I'd often feel entirely ill-equipped to take on the constant piling up of new challenges. It’s not necessarily an issue with its tutorials, which do a decent job of relaying the basics, so I think it’s just me struggling to cope with the sheer amount of freedom you have over everything you do.

By the time hazards and infestations started getting thrown into the mix I was about ready to cry. Quite honestly, no recent game has cast me into a pit of despair quite as regularly as Automachef – not Sekiro, not Celeste, not even The Witness. I’d stay up almost the whole night and, by the time the sun returned, have scraped my way through maybe three levels.

But I really, really like it; it’s sure to absolutely delight its intended, masochistic audience. What I got to see of its story was silly and fun, and it only seemed to be getting nuttier the further along it went. I liked the definitely-not-a-robot companion and the absurd world-domination plot; I loved the euphoric kick that arrived after tweaking my machine to the point where it actually functioned, irrespective of any wasted buns; and I grew sick of my inability to reach anything above 90% efficiency.

It’s simultaneously infuriating and humbling, requiring you to think like a robot while somehow still encouraging creativity – the best of both worlds, then: human and machine.

Automachef is a brilliant, hard-as-nails puzzler which challenges you to think like a robot while simultaneously cultivating a distinctly human sense of creativity
By Cameron Bald
| Jul 23, 2019 |
Switch
Find out more about Automachef
SEE COMMENTS