Rumble in your pocket

Hearthstone fans are getting a Christmas present in the form of a new expansion. It's called Rastkhan's Rumble and should be live on the 4th of December.

You can buy card pack bundles right now, though, including a new Shaman hero. But before you splash your cash, here's a rundown of what to expect.

Make sure you login on or just after the release date to get six sweet free card packs for the new expansion. Even better, you'll also get one free Legendary, the rarest cards in the game.

It'll be a Loa, one of a new group of powerful minions themed to the expansion. Each class has a Loa and many of them are Beasts.

But that's not all. You also get two of another new card group, Spirits. Your free Spirits will be from the same class as the Loa. Spirits are zero attack minions that have Stealth for one turn and a helpful passive effect to boost your game. 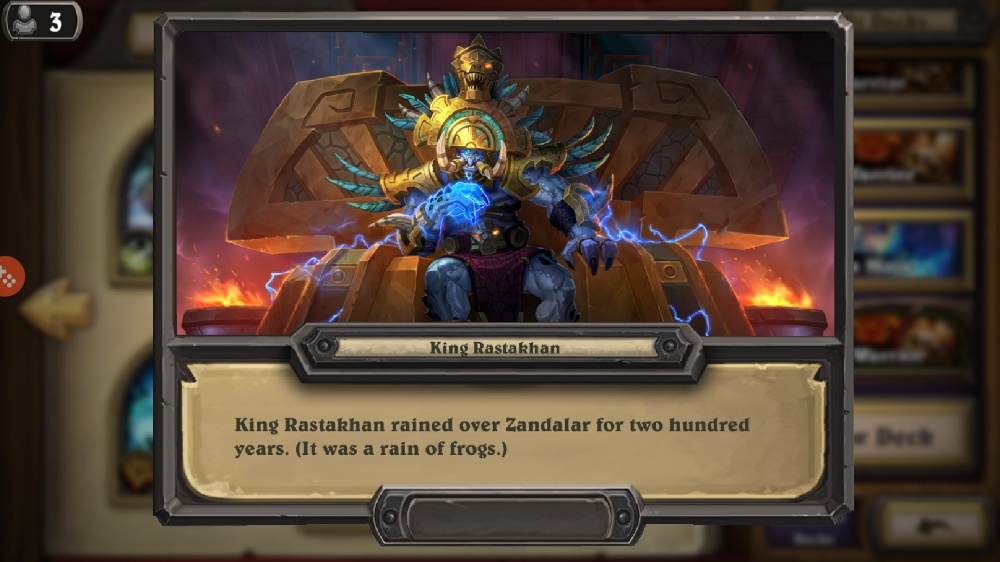 The expansion also introduces a new keyword, Overkill. This effect triggers if the card does more damage to a target minion than it's health. Of course that target will be dead as well, so it's a double whammy when it's pulled off.

Although this is all-new content, it's also the beginning of the end for the current card rotation. This is the last expansion in the current "Year of the Raven". When that ends, the oldest expansions now allowed in Standard format will move to Wild.

Let's start with Priest which has been the weakest class in the game for far too long. Blizzard have tried to remedy this situation in each expansion, and mostly failed.

No surprise they're trying again, it seems by introducing a slew of new archetypes and hoping one sticks.

The most obvious one is a necromancer. With cards like Spirit of the Dead and Sand Drudge, Priests have the potential to summon armies of undead.

What's particularly interesting about this is that there seem to be several viable builds here. The necromancer cards combo with spells, resurrect even weenie minion buffs. We could potentially even see an aggro Priest build.

Priest also has a long-standing tradition of stealing cards from other classes. But, unlike the equally roguish Rogue that hasn't, as yet, translated into an actual archetype.

Princess Talanji is the card that makes this a possibility. She could also combo with various Discover effect cards in a Dragon or Taunt-heavy build. 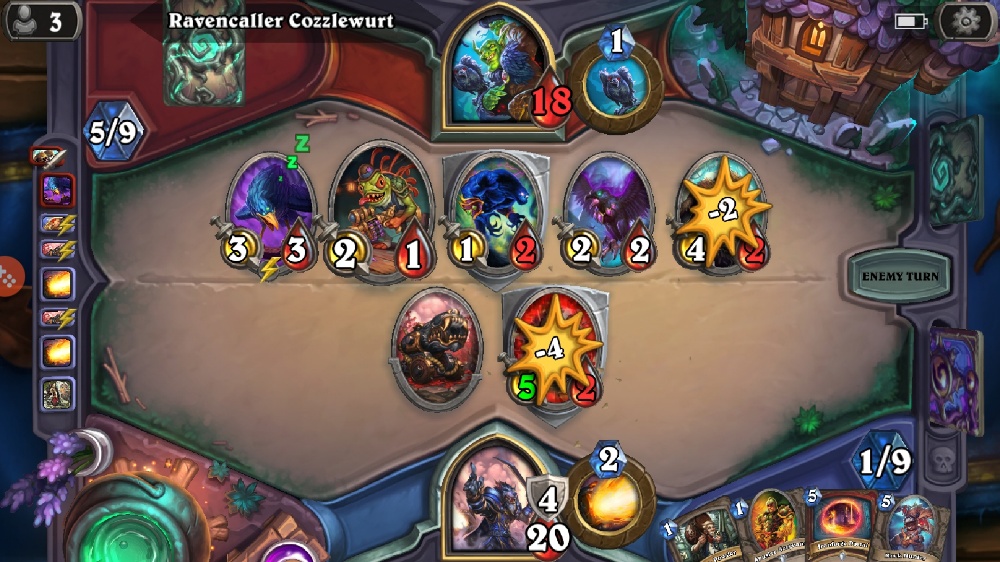 Mage is also in the doldrums a bit right now after the nerf to its workhorse card Mana Wyrm. But while that shafted tempo based decks, control versions just about hung on in the meta. Those look to be getting a boost from new cards like Firetree Witch and Arcanosaur.

There's also a semi-new archetype on the horizon for the class. Players have tried Spell Power Mage before, but it never quite worked.

The classes' Spirit and Loa from this expansion, though, are clearly aimed at remedying that. They're ably supported by other cards like Pyromaniac and Daring Fire-Eater.

At the other end of the scale, Paladin and Druid are currently riding high in the meta. Fittingly, then, they don't get too many interesting new toys.

Spells and handbuff look to be the big things for the former, but it's hard to see them displacing the reigning Odd and Even decks for the class. The latter gets a slew of new Beast pets, but not enough to make Beast Druid into a workable theme.

It's a similar story for Rogue. This set wants to push the Pirate theme for the class, but even if it works, it's unlikely work as well as Even Rogue.

They might work well in Kingsbane Rogue though, pushing it from its current fringe position into a mainstream build.

Existing Hunter builds, meanwhile, get a huge boost. Oondasta is going to be brutal in Deathrattle Hunter. Revenge of the Wild will do the same in Spell Hunter. There are a load of new cards that can fit in the still half-decent midrange Hunter deck. 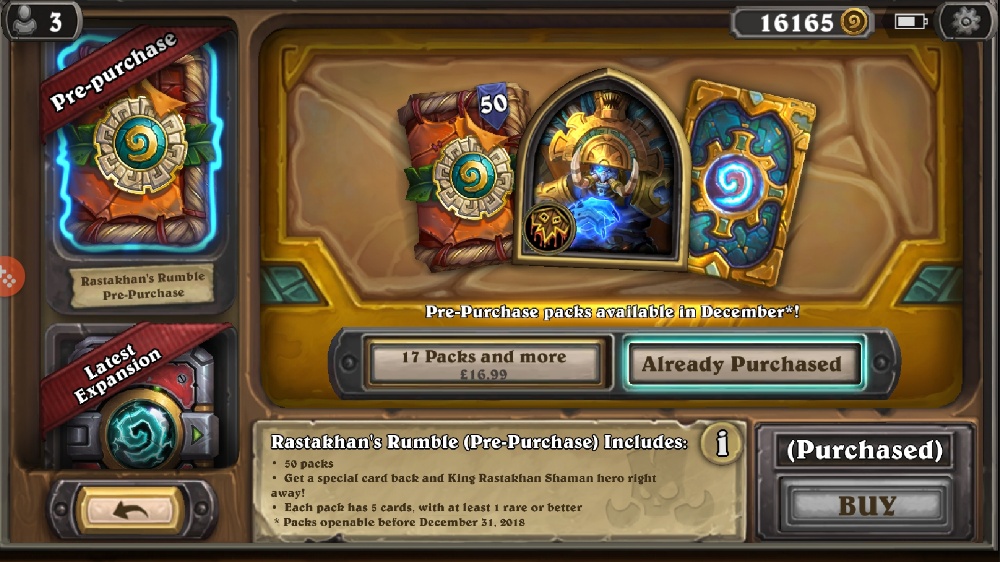 For Warlock and Warrior it looks like some classic archetypes are going to get resurrected. The latter has a load of new options for self-abuse with discard related effects.

The big news here though is that many "discard" effects have changed to "discard lowest cost", giving the player a lot more control. Warrior, meanwhile, has the tools to rebuild the Rush and ever-popular Dragon decks.

That leaves Shaman. It's long been the most problematic class in the game, and it's hard to see a clear direction to fix that in this expansion.

Evolve and Overload get pushed, as they often do. But whether that will be enough to make either stable enough to be viable remains to be seen.

While it looks like we're heading into a healthy meta, with moves toward class balance and plenty of variety, there's also a problem.

From the outside, it looks like we've got a healthy meta with lots of variety right now. Yet a fair number of veteran players are complaining the game feels stale.

One possible reason for this is that classes, on the whole, have become almost too flexible. There are few real weak spots any more.

Most can build a deck that's capable of dealing with a wide variety of different threats. As a result, although there are lots of cards and classes in the mix, many of them feel samey to play.

Aggressive decks, except for Paladin and Rogue, have taken a back seat. Games run longer now and often turn on ongoing value generation.

The big source of these are Death Knights with their upgraded hero powers. So it's no surprise that cards like Rexxar and Gul'dan that enable it make it into so many decks.

If this analysis is right, there's no quick fix for this. We'll probably have to wait until the next set rotation to see enough of a shift to build a foundation to make things better. But some cards in this expansion seem to fit into the ongoing pattern of flexibility.

Take the new Warrior weapon Sul'thraze which uses the Overkill keyword to enable multiple attacks per turn. Warrior has traditionally been weak on multiple minion removal, but Sul'thraze is one of many tools they have to play around that.

As ever, though, it's all just theorycrafting until the cards hit the real world. And then we're in the most fun, creative time of all. So open your packs, get building and enjoy!