Flying a plane in a dogfight should be difficult. I mean, in an FPS game all you need to do is walk forward, but in a aviation-based shooter you also need to keep a really heavy bit of metal in the air at the same time. But that difficulty needs to be considered in very specific ways. Especially on mobile. Luckily though, Sky Gamblers: Storm Raiders 2 gets everything just about spot on.

There are control options for almost any level of player, and while they all offer their own challenges, they're easy enough to get to grips with if you've made the right choice as to which you're going to use.

Oh, and the game looks amazing too. Swooping through a storm, protecting a flotilla from U-boats and dive bombers, lightning crackling in the background, and a German fighter streaking through the clouds billowing smoke and flame from its stricken tail - "wow" moments of a similar magnitude are waiting around every corner.

The main campaign of the game sees you fighting a variety of battles from World War 2. To give you some idea of the scale the game is playing around with the first level after the tutorial sees you taking off from an air force base close to Pearl Harbour. The first moment in history you jump into is one of the most pivotal in the story not just of the war, but of the world.

While the battles you're playing your part in might be massive, they still manage to remain tightly focused. Even when the air is filled with machine gun fire and explosions, you've rarely got more than five or six planes to worry about. It's a clever mix of style and design, but it makes every level feel a little more epic than it would have done otherwise.

And it's that extra bit of thought that makes Storm Raiders 2 stand out from the pack. Soaring through the air inside the cockpits of some of the most iconic planes of the last hundred years, you can look around you and feel the tightness of the space. It gives you the smallest iota of an idea of how it must have felt to be up there. 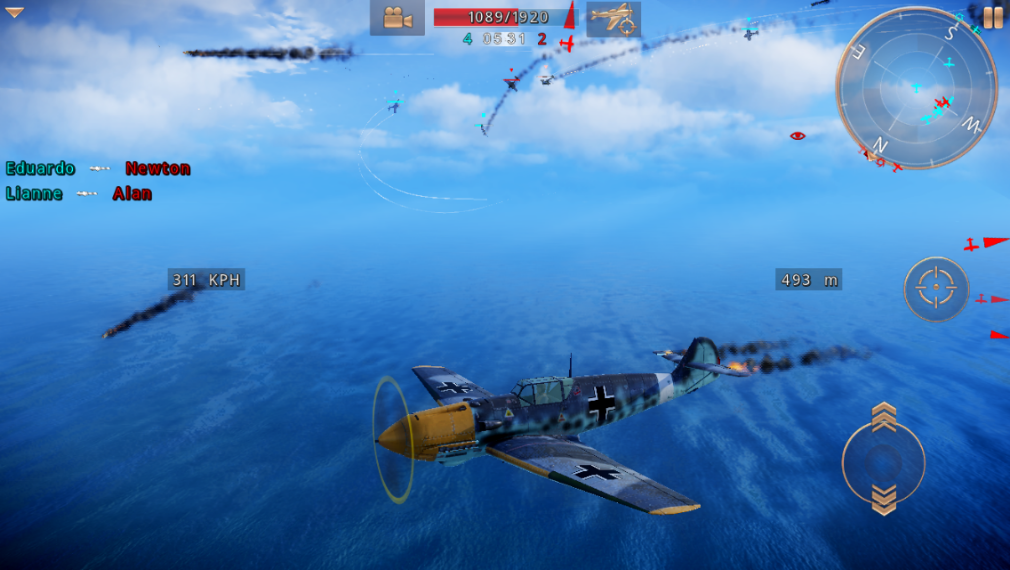 The different controls options are a mixture of tapping, swiping, and tilting. It is going to take you a while to get to grips with any of them, but the game is pretty gentle when it comes to giving you the room to do that. You rarely feel forced into any situation that you can't deal with.

The game also comes with the usual raft of multiplayer options, and they're all an awful lot of fun. It has the feel of a console release from the days when multiplayer and single player content were equally as important. Both sides of the coin are polished and tight, and playing one will help you in the other.

It always feels like you've got something to do, whether that's unlocking planes, working your way up the leaderboard, or trying out a level on one of the tougher difficulties to earn a higher score. And everything that it offers up for you to try manages to be just about the right size for a quick mobile meal.

It's good to see that there's still space in the gaming world for action flight sims. There are few things more thrilling than dogfighting done well, and Sky Gamblers: Storm Raiders 2 manages to capture that thrill in a way that a vast swathe of different people are going to be able to enjoy it.

Whether you're a veteran of the digital skies above the white cliffs of Dover, or you've only just considered the possibilities of manned flight, you're going to be able to pick up this game and have fun with it. And that's a not inconsiderable achievement.