There are few terms so nebulous as retro. So many games of so many different styles, all cobbled together in a catch-all rose tinted memory that doesn't really serve the purpose that it's designed for.

Because when you see Help! I'm Haunted, you're going to think a number of things about it very quickly. The first word that pops into your head is almost certainly going to be retro. And from there you're going to run away to super-tough, metroidvania, and simple controls.

And you're going to be running in completely the wrong direction. That's because the game apes a completely different style of old school platformer, one with a more methodical rhythm and a focus on considered movement rather than twitchy dashing.

Who you gonna call?

The game sees you playing a ghost buster of sorts. You're called in when a character is in trouble, and you're aiming to make it through a series of traps, obstacles, and terrifyingly adorable ghoulies.

A couple of buttons on the left of the screen let you move around, and there's a jump button on the right. There's also a four way shooting switch. If it's sat in the middle you're not shooting, but slide it up, left, or right, and you'll start blasting away in that direction.

It's a really interesting way of playing, and it turns every little battle into a short burst of tactics and dodging. It's this that gives the game its considered and deliberate pace, with each scrap feeling like a little duel between you and a spook. 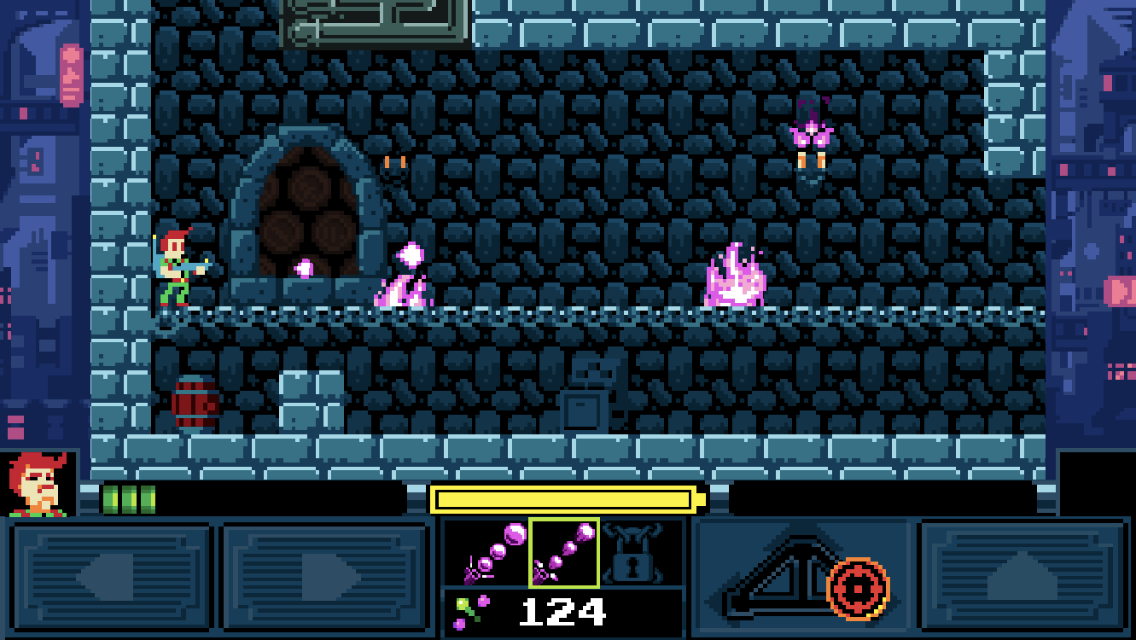 These are no one-hit wonders though, and taking them out with your spook-destroying laser cannon is quite often a lot trickier than you might think. Enemies are placed where they can do you the most damage, and offer up only the smallest chance that you can take them out before they fire.

Every little victory feels hard won, and then you're back to the world map to find another customer who's being harassed by ghosts. You can buy and upgrade new weapons too, ensuring you're always one step ahead of the apparitions you're so focused on killing.

There's an exquisite balance here, and even when you fail you're going to feel like you've learned something that's going to help you out in the next challenge. You will push on as well, because you want to see the next new idea the game is going to chuck into the mix.

Help! I'm Haunted is a timely reminder that speed and reaction times weren't always the defining concepts of older platformers. There's a rich variety of different kinds of play that have yet to be mined by devs, and it's great to see something starting to happen in that direction.

This is the sort of platformer that makes you think about every step, and while it doesn't quite manage to make you second guess yourself like the very best games do, it's still an engaging and entertaining experience that you should definitely try out.

There's some really solid fun to be had here, but you need to get used to how the game plays first
By Harry Slater
| Nov 2, 2018 |
iOS
Find out more about Help! I'm Haunted
SEE COMMENTS