Epic Games is trying something new in its latest limited time mode, Disco Domination. We hope you’ve been brushing up on your Fortnite dance moves, because they will be put to the test quite soon. 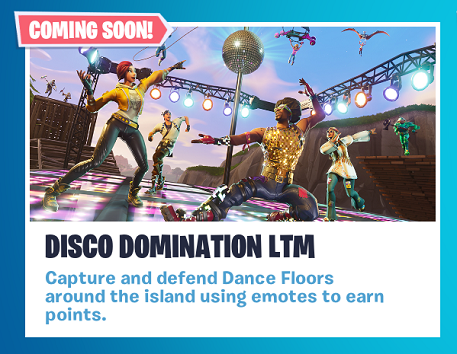 Announced today in an in-game news update, Disco Domination will encourage players to “capture and defend Dance Floors” across the map by using the game’s now famous dance emotes to collect points. Dance moves take up precious time, though, so you’ll have to be careful not to be taken out by your opponents while you get your groove on.

Expect Disco Domination to begin in a few days, when we’ll learn more about how this event will work. In the meantime, Fortnite Season 6 is well underway, introducing pets, Shadow Stones, and a spooky new theme called Darkness Rises. We might even eventually find out what the deal was with the infamous Cube.

Why on Earth is Trivia Crack getting a sequel?