By Emily Sowden
| Jun 22, 2017
Android
|
Run or Die
Find out more about Run or Die
Available on: Android

Run or Die is the type of game that puts you through a rollercoaster of emotions. Not the 'will they, won't they' sort, more like a love / hate relationship of epic proportions.

But here's the thing about those kind of relationships - they're horrendously endearing and addictive.

After completing the tutorial (highly recommend for first-timers), the basic concept is that you're using a somewhat dodgy R.O.D suit which, aside from running forever and looking awesome, allows you to use five special abilities.

The key here is that you've got to make it across a series of 170 hand-crafted maps - which interchange when you die - to save your ol' pal Flow from the Lab. 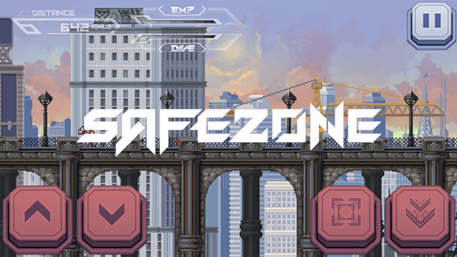 Running and jumping and sliding all seems perfectly simple, right? Wrong. It's so hard sometimes that it makes you want to give up. But, in the same sense the run time is usually short enough that it there's an tight just-one-more-go loop here.

For those getting mad at the fact it's hard as hell, yes it is and it told you that on the store page. It said "Warning: Run or Die is not a casual game."

If you persist through the first period of stress and annoyance, however, you'll find a decent, entertaining, and well-rounded runner that makes you want to beat your own high score.

There are also a couple of different modes for you to work through, from the usual Endless mode to Training, Daily Runs, and Challenge mode. It's not exactly a wide selection, but you don't really need one in this type of game.

The five abilities are varied enough that it keeps things interesting. Aside from 'jump' and 'slide' which sit on the left of the screen, the five powers are offered up in rotations of two so as not to crowd the UI. A very good choice.

It certainly makes things more complicated, especially when the constant changing of maps keeps you on your toes in regards to the powers given to you. But, I'd rather see the full screen than have all of the powers on display.

Of course, that's not to say that this game is perfect. No, it still has its share of technical and porting issues.

The first thing was in the Training mode. When running through the list of abilities, sometimes the buttons would constantly press by themselves making them unusable. 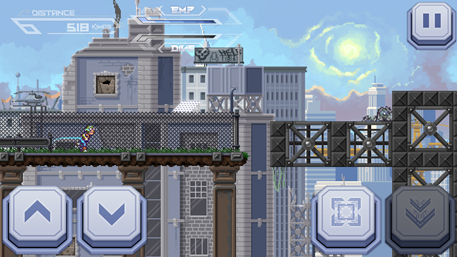 There was also a bit of a crossover during one of the loading screens where it'd mark out the controls for a controller rather than a phone. Whether this was intentional or not, it really stood out for the wrong reasons.

Though the game isn't meant to be for the weak, sometimes it is incredibly harsh. If you're particularly twitchy-fingered you might find that you die an awful lot and that can be a little demoralising after a while.

It's not a game you'll be playing for hours, that much is certain. With repetitive gameplay, a frustratingly high death rate, and occasional bugginess, Run or Die is best suited to quicker play sessions.

That being said, for an endless runner it's nicely balanced, addictive, and, despite the occasional technical hiccup, it feels very much at home on mobile.

Be warned though, if you consider yourself a casual gamer, or you have high blood pressure, this one is not for you.

Run or Die is a hard-as-nails endless runner which doesn't attempt to be anything else, and that's kind of great
By Emily Sowden
| Jun 22, 2017 |
Android
Find out more about Run or Die

New iOS and Android games out this week - June 22