Every week we’re taking the temperature of modern virtual reality with an open letter from a person working in the industry. This week the lead designer on Battlezone, Rebellion’s Steve Bristow, talks about the logistics and feelings of prototyping for VR...

A few years ago, a virtual reality system for the home was becoming actual reality.

Around the same time, Chris and Jason Kingsley – Rebellion’s owners – picked up the rights to Battlezone; a name and game that had always inspired them, but also a potential link to the nascent VR systems. After all, the original 1980 arcade cabinet, with that iconic visor which players peered through, is considered by many to be the first ever VR game.

As a developer, you’re always guardedly excited about any new platform. It’s a huge commitment to dedicate resources to support it and, of course, you’re not solely relying on your own ability to make something people want to play. You’re gambling on the success of the platform itself. At that time, there was a lot of scepticism about the size of the audience we could expect, and the capabilities and quality of the hardware.

But the possibilities were intriguing. If it all worked as well as hoped, and the gaming audience got into it in large enough numbers, we had the chance to make a genuinely new experience. And it’s always been in Rebellion’s DNA to take a punt at that goal. 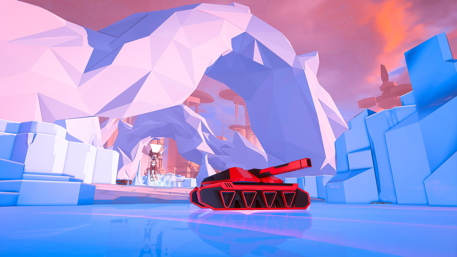 So, to begin with, the Kingsleys asked me to try an experiment. The task: to dream up a spiritual successor to the classic arcade Battlezone. Updating it for a modern audience and delivering it in VR. As a game designer and fan of the original, that day ranks high in my Best Ever Days At Work list.

With a small team, we set about tackling - broadly speaking - two parallel development threads. The first was designing the game itself; how we want the player to feel, and the mechanics and style that would create that feeling. The second was to understand VR itself; not just what it offered but what new challenges were inherent to VR. We’d have to overcome these challenges to bring both threads together and properly scope the project. We understood control systems and player movement in VR would present us with challenges we hadn’t solved before. So from the off we set up development to allow designers a lot of control over the tank’s behaviour, ensuring we could prototype and iterate as quickly as possible.

My childhood memories of the original Battlezone are still vivid. It was exhilarating, dark, futuristic – almost scary. It felt like some kind of grim military simulation had been dropped into the arcade. It was also very difficult. But when you got into the rhythm of it, you felt skilful. Popping long range shots at distant targets without slowing your turn. Wheeling away from incoming fire flying under your nose. These were the feelings that our design decisions had to capture, and it became clear early on that VR would provide a lot of that and more.

The control method and, in particular, strafing and aiming, were our first hurdles. Classic Battlezone doesn’t let you strafe, only rotate, advance or reverse. This does make it feel tense as you struggle to bring a target to bear, all the while expecting a shot to hit from you behind at any moment. Also, the original has a purely lateral target field, meaning you can’t elevate your shots. In other words, your only axis of aim is horizontal.

It was a wrench to move away from those iconic controls. But adding strafing brought agility and it meant the player could handle larger groups of enemies, slip incoming fire and fine tune their lateral aim. It simply felt more contemporary, natural and intuitive, especially with dual analogue sticks. 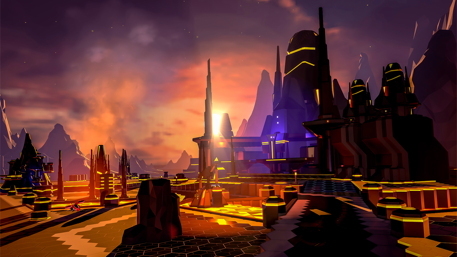 Our version also needed a three-dimensional aiming field to fully exploit what VR was offering us. I considered using look aim, in which you tilt your head around to get a crosshair on the target, but I rejected it for a few reasons. In our case, I didn’t find it particularly comfortable, and it meant I was perpetually focused purely on my target, and not on the space around me.

It was also a little fiddly, requiring a bit of compensation which I felt conflicted with the game’s level of challenge somewhat. And, to be frank, it just didn’t feel very... tanky. So, in our Battlezone you move the gun up and down across the Y-axis, but you rotate the entire tank to aim across the X-axis.

With these systems in place and bad guys shooting back at you, the prototypes looked promising on flat screens. But put them in VR and they were really taking off. Sensing where the enemies that surround you are, the truly physical sense of scale, and a direct personal involvement in the action – it delivered an electric feeling, much like what I felt playing Battlezone at the arcade as a kid.

Jason and Chris were very conscious of comfort issues that were pushing up against my... rather exuberant early prototypes! They offered crucial tuning pointers to make it a better experience for the largest number of players possible – but those feelings we aimed for stayed preserved. And just like that, those changes gave them and us the confidence to get a demo prepared for E3 2015.

The incredible reaction that demo received, and the game has since, has been a real validation of Rebellion’s experimental spirit, combined with our years of development experience. After a lot of hard work from every single department of the company, we’re now really excited to be a launch title for PlayStation VR. And I can’t wait for you to feel what I’ve felt playing our vision of Battlezone.

Steve is lead designer on Battlezone at Rebellion. Rebellion is the company behind videogame classics like Aliens Vs Predator and the Sniper Elite franchise. In April this year it released a remastered version of the 1998 Battlezone game, after acquiring the rights to the title from Atari.Battlezone VR is scheduled as a launch game for PlayStation VR on 13th October this year. You can follow Steve on Twitter.

1/ Pam Peterson says there are great VR games out there now!
2/ Mike Bergene looks at the VR development community from the perspective of a lone indie game maker.
3/ Bojan Brbora thinks the most interesting VR projects right now are not necessarily games.
4/ Jonathan Wagstaff looks at the numbers around VR's presence in the UK.
5/ Tony Mugavero of Littlstar talks about the 360-degree entertainment experience.
6/ Up next: Milena Koljensic of DIVR Labs talks about developing their Blue Effect game.
7/ Could be you! Email us: [email protected]

The best and worst of iMessage games for iOS 10

New cards and adventures are coming soon to Reigns