ArcheAge Begins review - An RPG that forgets what makes it interesting

With RPGs having rapidly become quite stagnant on mobile, it's genuinely refreshing to see any game that makes even the slightest of changes to the formula.

So while ArcheAge Begins may not be the best or most original game out there, its unique mechanics and visual flair definitely works to its advantage.

But instead of highlighting these more interesting aspects, the game instead bogs itself down in endless menus and confusing diversions.

ArcheAge Begins is, on the surface, fairly typical. You create a team of four characters, and then send them into battle against waves of enemies across a series of levels.

There's all the usual classes - warrior, mage, archer, and so on - and you'll need to create a varied team and level them up as you go to ensure victory.

What sets the game apart from its rivals, however, is an interesting combat mechanic that actually makes it feel like you're adding something to the battle. 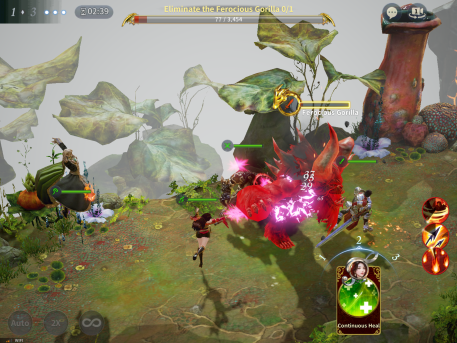 Basic attacks are handled by the AI, so you're left to deploy special attacks when it's deemed appropriate. These appear in the form of cards on the side of the screen, and charge as you play.

To use them, you need to hold down the card with your finger, and then slide it onto one of the three targets the game chooses for you.

It adds an extra level of depth in battles, as you can use these attacks to position certain heroes, or make sure an ability with a wide area of attack is used properly.

ArcheAge Begins also uses the mechanic elsewhere, most notably in a minigame involving feeding a horrific cow-monster with the right troughs until it squirts milk all over the place.

You can, and most likely will, turn on the Autoplay and 2X features as soon as you get the chance, but the slight twist on the formula is definitely welcome.

And each attack is a joy to watch thanks to some impressive animations, which are also apparent in the transitions between waves. 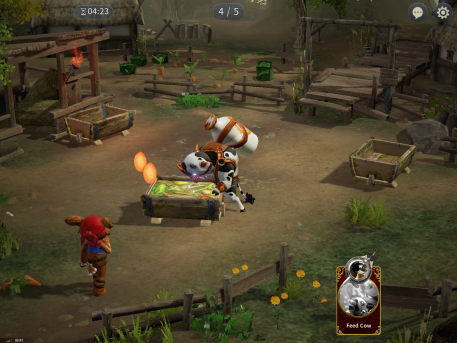 Sadly, that's where the originality stops. The rest of the game is the usual grindy RPG fare, with an endless array of elements required simply to level up one piece of gear.

This isn't helped by the cumbersome, confusing menus that you'll have to struggle through just to upgrade a sword, as well as to change your team, recruit new heroes, and so on.

All in all, it seems like ArcheAge Begins spends so long trying to be like the other RPGs on the block that it completely ignores what makes it unique.

The beautiful animations and interesting combat system are swiftly forgotten once you have to dredge your way through a thousand menus to find something.

Had it scaled back and focused more on the gameplay over its meta, this would've been great. As it stands, it's just too darn confusing.

ArcheAge Begins review - An RPG that forgets what makes it interesting

ArcheAge Begins has some interesting mechanical ideas, but it's too bogged down in the usual genre trappings to let them shine
Next Up :
Hero Emblems II review - "Lovely visuals and music, but match-3 combat lacks strategic depth"