Another Eden: The Cat Beyond Time and Space has finally revealed its latest crossover event with Square Enix, and yes, it's with the classic Chrono Cross franchise. Previously teased in a livestream event, the latest collab for Wright Flyer Studio's mobile JRPG will land on both iOS and Android devices (and on Steam) on December 9th.

In the latest crossover event for Another Eden, players can expect another thrilling storyline from Masato Kato of both Chrono Cross and Another Eden fame. Serge, Kid, and Harle will all join the fray as playable characters, and will be fully voiced for the very first time. To be fair, we have updated the tier list of Another Eden characters already.

To be honest, the cinematic trailer alone for the collab event already gave me the chills, but if you're looking for more reasons to dive into the game and soak up all the nostalgia, the Symphony sees the return of core members Yasunori Mitsuda and Nobuteru Yuuki from the original Chrono Cross team who have overseen the collab event. 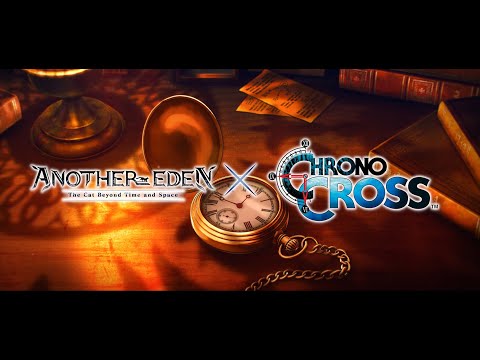 You can discover more about the in-game campaigns on the event website, but here's something I specifically want to highlight because it made my heart skip a beat: there's a secret link on the page that'll turn back time and take you back to the year 2000 when Chrono Cross was released, and the hint is "clock".

…did you find it?

If you just can't wait to experience the game for yourself, Another Eden is available to download on the iOS App Store and on the Google Play Store as a free-to-play game with in-app purchases, as well as on Steam. If you're unfamiliar with the game, you can check out my review to get an idea of the JRPG.

On the hunt for similar titles on your phone? Why not take a gander at our list of the top 25 best Android JRPGs for phones and tablets?

Next Up :
Siege: Apocalypse, the 1v1 military strategy game, will release for iOS and Android early next year

Another Eden adds new chapter, maps, login bonuses and more to the JRPG in latest update

Another Eden launches crossover with Chrono Cross, adding new characters, events, and upgrades to the JRPG