Sponsored Feature: Nevosoft on why Amazing Shape Shifters is out of this world

Saving the planet, one energy crystal at a time

Amazing Shape Shifters is the latest addictive and attention-grabbing iOS release from Russian developer Nevosoft. In this game, your aim is to recapture vital energy crystals that were stolen from the Shape Shifters' home planet by green space pirates.

Thanks to this physics-based game's innovative mechanics - and plenty of your own logic and strategy chops - you can change from a ball to a cube (and back again) to defeat the pirates by bumping them off their platforms.

You can unlock missions across 4 planets; increase your power by collecting crystals; and create and submit your own custom levels to ultimately save the Shape Shifters from extinction.

We spoke to Ekaterina Zholobova, part of Nevosoft's development team, to get the lowdown on the studio's inspiration and influences for Amazing Shape Shifters.

"Inspiration for the game came from Wereboxes, a popular Flash game that one of our colleagues thought up and designed. We wanted to create something new, got permission from the developer, and altered the game mechanics a bit to make the rules easier to understand," Zholobova said.

"With tons of physics-puzzlers out there, we wanted to know what qualities would set apart Amazing Shape Shifters from the rest of the genre on the App Store.

"It's very simple and user friendly, but with a framework that allows for the easy creation of a variety of interesting levels. When we began working on the project, we didn't anticipate the huge number of ideas that we would come up with and want to implement in the game.

"The second thing that makes our game stand out is that we made it possible for players to create their own custom levels. Every day, players share dozens of new levels, and we are amazed by the ideas that users come up with."

Nevosoft didn't want the gameplay in Amazing Shape Shifters to become boring or too easy, of course. Dedicating time and resources to making sure the game-playing experience was kept fresh and interesting became an important factor during the development of the title.

"When making the game, we tried to design it so that the players wouldn't just go through, solve the different levels, and that be the end of it," Zholobova stated.

"We built it so they could compete with each other, figure out different, original solutions to various levels, and implement their own ideas. We paid a lot of attention to the Shape Shifters' emotions, too. It's always fun to show off your skill, so we included an action replay feature."

With a bit of imagination and reworking, the Nevosoft team was able to overcome any challenges it was faced with during the development process.

"Even though we're not new to game development, this was our first physics-puzzler. We set the bar really high for ourselves. So, it was challenging. Overall, though, we found it quite interesting," Zholobova said.

"We studied and experimented with various ideas. We dreamed up four planets, each of which contains a new feature: platforms with joints, elevators, ice blocks, etc. We reworked and polished each level several times - it was important to us that the levels are gripping and unique.

"Currently, the game has 72 levels. The game looks good and runs smoothly on older iOS devices. This was an important technical challenge that we successfully overcame."

Amazing Shape Shifters will continue to undergo transformations of its own as future updates are issued by the developer.

"We decided that every fresh level pack will add a new planet to the game that will include a new element of gameplay. Right now, we are testing the first update, which will introduce players to portals," Zholobova stated.

Check out the gameplay video for Amazing Shape Shifters below. 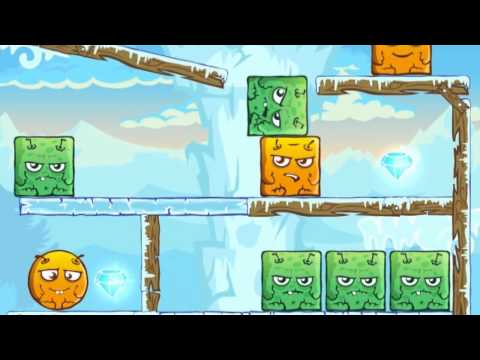