Tourdog has announced an update filled with intrigue and canine cuddliness in Alchemy Stars, its anime-themed mobile RPG with tactical elements. In particular, players can expect limited-time in-game goodies and even a special edition doggo Aurorian as part of the title's April Fools Event.

Alchemy Stars boasts a unique combat mechanic that lets players unleash their inner tacticians across a grid-based battlefield by matching colours and elements. The latest update features a special Mysterious Festival Eve Bonus that will give away Lumamber ×1,000 in celebration of the annual Forgiven for Lying - Mysterious Festival. In addition, the Limited-Edition 2-Star Aurorian - Tourdog is joining the fray, which Navigators can claim beginning April 1st from their in-game mail. 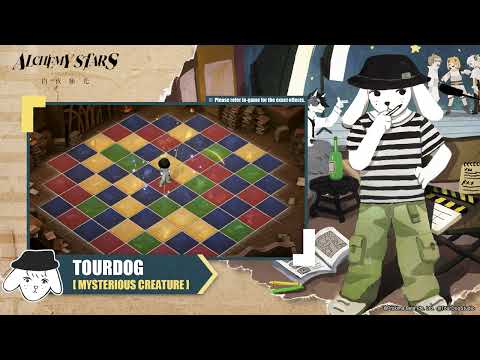 Meanwhile, players can also nab Limited Edition Keating Avatar - Wake Up ×1, Nightium ×50,000, and General Jasper II ×5 simply by logging into the game during the festival. The "Tourdog, Goodest Dog" mini-game is also available for players to get their hands on on the game's official website.

The proclaimed “Goodest Dog” joins the Umbration faction and holds a special place in the heart’s of Alchemy Stars’ dev team, who describe Tourdog as a “serious yet funny character” that “suits a trade city, like Umbration, which has enough entertainment to satisfy a striving Tourdog.”

Finally, players who participate in the Handsome Tourdog Community on Twitter can get a chance to win a Deluxe Edition reward, plus a Tourdog Exclusive Furniture - Touring Clapperboard global server reward when a certain milestone is reached.

If you're keen on joining in on all the festivities, you can download Alchemy Stars on the iOS App Store and the Google Play Store for Android devices. It's a free-to-play game with in-app purchases.

What's A Preferred Partner Feature?
From time to time Steel Media offers companies and organisations the opportunity to partner with us on specially commissioned articles on subjects we think are of interest to our readers. For more information about how we work with commercial partners, please read our Sponsorship Editorial Independence Policy.
If you're interested in becoming a Preferred Partner please click here.
Next Up :
Honkai Impact 3rd releases v5.6 Elysian Reverie update with a new fighter, weekly challenges and more