Much like Shovel Knight before it, Aegis Defenders is a love letter to bygone days that didn't quite happen how you remember them.

The debut project from developer GUTS Department tells a story set in the ruins of a very advanced civilisation, long after some catastrophic event has taken place - so far, so video games.

But Aegis Defenders sets itself apart with a really interesting mix of the run-and-gun action platforming of the Metroidvania genre and the planning and strategy of a tower defence game.

The loop is pretty simple - you explore a level, reach a point you need to protect, and then build traps and defensive measures to stop wave after wave of badness from reaching it.

On paper, this doesn't sound like much to write home about, but Aegis Defenders manages to turn these ideas into a tense and thrilling experience.

To start with, just two characters are available to you, with a further duo being added into the mix laster in the game. In single player, users have to switch between multiple characters to get them to lay specific traps and defences to manage different, colour-coded, enemies. 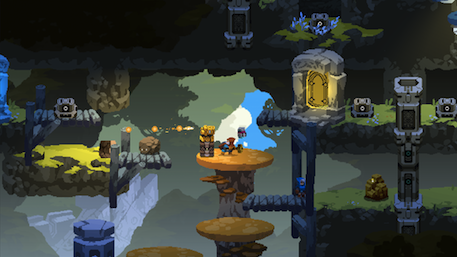 Bart can lay down turrets and defensive blocks to begin with, while Clu specialises in bombs and spike traps. These sections are a balancing act of maintaining your pre-prepared defensive measures and dealing with enemies yourself using your own weapons - it's an intoxicating mixture of exerting control and trying not to be totally overwhelmed.

The game also has a local co-op mode which relieves some of this tension, but there's a thrill to co-ordinating your efforts. As with most co-op games there's also a lot of 'both of you need to stand on these buttons to open this door' nonsense, but the rest of the game is great so we'll give that a pass.

The project opts for a 16-bit-inspired pixel art style, and while we have seen this done before - many, many, many times - Aegis Defenders looks absolutely gorgeous.

Like Shovel Knight, it takes the aesthetic of a long gone era and brings it up to the modern day with super smooth animations. And on top of all that the game runs at a great click, and there's a melodic and effective score.

There could be better explanations of how some of the mechanics work, and often the difficulty spikes pretty suddenly, but ultimately you can figure out what's going on and what you need to do to win the day.

Aegis Defenders is a really impressive debut project from a group of first-time commercial developers, and definitely deserves a place among the plethora of high-quality retro-inspired titles on Switch.

While it might sound like a mush of ideas that shouldn't work together, Aegis Defenders is actually pretty brilliant
Next Up :
Hundred Days review - "A success for the management genre"