99 Fails Lite is a hardcore platformer that's the stuff of nightmares, out now for iOS and Android

Frying Jelly has announced that 99 Fails Lite is now available for iOS and Android, letting players put their own reflexes and hand-eye coordination to the test in this hardcore platformer. Players play as Zeebo as he tries to navigate psychedelic levels to escape from Noobota.

In 99 Fails Lite, players can expect to immerse themselves in a bizarre dream world in an attempt to escape with their sanity intact. The game features odd creations and surreal environments in a hand-drawn art style that paints a pretty vivid mental image with every run.

The game also features global leaderboards players can try to climb for the ultimate bragging rights. Levels get progressively more challenging, with unique mechanics in each stage that will make Zeebo morph into various forms. 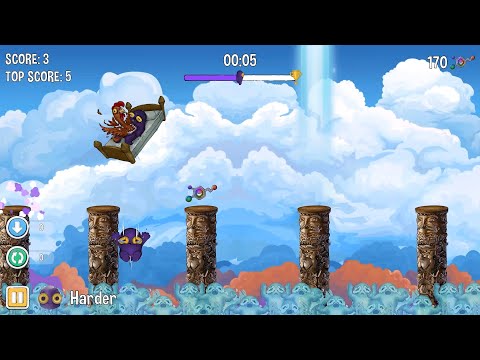 From the clip above, it does seem like the game isn't for the fainthearted, so if you're "a glutton for punishment" and "a fan of weird stuff", and if you're eager to get first dibs on the title, you can download 99 Fails Lite on the Google Play Store for Android devices and on the iOS App Store. It's a free-to-play game with in-app purchases.

You can also visit the official website for more info, or join the community of followers on the game's official Twitter page to stay updated on all the latest developments. You can take a little sneak peek at the embedded clip above to get a feel of the game's visuals, mechanics and gameplay as well, or find out more about Neebota: 99 Fails - which you can now add to your wishlist - on Steam.

Are you on the lookout for more similar titles that will put your skills to the test on your mobile device? Why not take a gander at our list of the top 25 best platformers for Android phones and tablets?

Next Up :
Never After, a new ARPG twist on classic princess tales, releases in Southeast Asia