As motivations for slaughter go, vengeance is pretty high up the list. Whether it's for a family member, a village, or a favourite pet, video games are full of men and women on missions of revenge.

ZiGGURAT, from Action Button Entertainment and Freshuu, takes things a few steps further. You're not just fighting because a few people have been unjustly killed - you're fighting because everyone else in the world is dead.

It's just you and a laser rifle, stood alone atop the titular tower, facing off against a never-ending horde of robotic alien monstrosities.

The end of the world as we know it

You can't move from your perch on top of the world. All you can do is swing your heavy weaponry around and blast out glowing green gobs of death in the direction of the tyrannical race that has murdered every other human being.

Eventually, they'll get you too, and after collating your score you'll jump back up and start again.

Waves come thick and fast, starting with small, slow aliens but soon progressing to behemoths, nimble-footed bullet dodgers with shields, and attack ships that pepper your position with hails of bombs.

The game looks like a '90s arcade title, with cartoon sprites and plenty of explosions. Against a backdrop of the setting sun and an empty world, a frantic chiptune soundtrack keeps the pulse racing.

There are two control methods at your disposal. Slingshot is the most familiar of the two, and sees you dragging back from your lone hero to catapult projectiles in the opposite direction. It's clumsy, inaccurate, and won't net you the biggest kill totals.

Precision mode on the other hand is a perfect fit for the desperate situation you find yourself in. You aim by sliding a finger along the bottom of the screen, and fire by releasing it. It's a fluid, intuitive system that's easy to get the hang of.

A single touch from an enemy or a bullet will kill you. You can charge your shots, but holding them in for too long depletes their power. If you're quick, and things get too up-close and personal, you can hold a charged shot at the end of your gun and use it to bludgeon back the closest foes.

A line in the sand

A fully charged head shot won't just kill the alien it hits but create an explosive chain reaction, knocking out everything around it. As the game goes on, these chains become essential if you want to survive.

And you will want to, because ZiGGURAT is one of the most addictive high score-chasers on the App Store. It's almost impossible to just have one go, and with every defeat, with every final capitulation of the human race, it digs itself a little deeper into your brain.

Your deaths never feel cheap or unfair, but the product of your own sloppy play. And that spurs you on to another final stand. 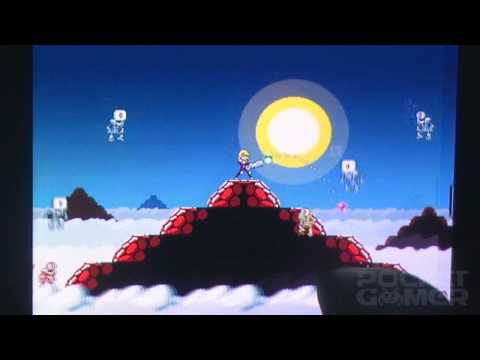