'Money buys you freedom, that's it'

There's no doubting Misha Lyalin's commitment to business or to ZeptoLab.

After parading around on stage in a large red costume and red wooly hat to promote Pudding Monsters in late 2012, ZeptoLab's CEO was in London for the launch of Cut the Rope: Time Travel.

There was no costume this time; only an On Nom shirt, and a restless demeanor.

"I've started six companies. I should have started nine," he says, as we talk about his history as an entrepreneur.

He's a man in a hurry, but as he points out, he wasn't a founder of ZeptoLab. Actually, he employed the Voinov twins (Semyon and Efim) in a previous game company.

"Now I'm working for them," he jokes.

The three clearly work well together.

Semyon and Efim handle the games, while Lyalin takes care of business and acts as the company ambassador, similar to Peter Vesterbacka's role at Rovio.

"I empower the staff, make sure that I hire smarter people than me, and make sure there's money in the company," Lyalin explains. 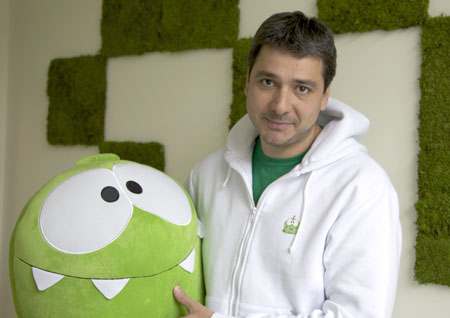 He says the days of him doing start ups - aside from some personal investments - are behind him for the time being. ZeptoLab is an massive opportunity, both culturally and financially.

"I always wanted to make an impact with my companies. At ZeptoLab, we have great possibilities. We don't want to screw it up," he argues.

Not about the cha-ching

In the manner only successful businessmen can pull off, he says it's not and never is about the money.

"Money buys you freedom, that's it," is Lyalin's view.

"If we need money to invest in our business, we will raise it, but at the moment, we don't have any plans to buy other companies or sell."

And making an interesting analogy, he compares ZeptoLab's approach to that of farmers, not business warriors.

"We are farmers. We just want to make games. It's not about conquering. The market is so huge."

In this context, he says the company's focus is on the quality of its products.

"With Pudding Monsters, we needed to make sure it was the highest quality. Monetisation and reach are different," he replies, to the question of whether ZeptoLab would have been better to focus all its attention on Om Nom and the Cut the Rope brand.

After all, it's been downloaded more than 300 million times, while Pudding Monsters underperformed, relative to Cut the Rope at least.

To underline this, Time Travel immediately hit the #1 spot in the US iPhone paid game chart, also going #1 in another 28 countries.

Indeed, aside from Cut the Rope: Time Travel, ZeptoLab hopes to release three other games in 2013, two of which will be new IPs.

"Like Disney, like Marvel, we want players to know what you get from ZeptoLab. It's a brand, although it will take time to build," he points out.

So, given the Disney comparison, how does ZeptoLab position itself compared to Rovio?

There are some obvious similarities. A small developer, published by Chillingo, has a global hit with a simple, physics-based game featuring cute characters that becomes a global phenomenon. 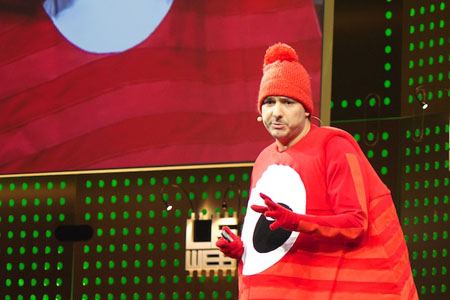 "We did when we started merchandising because Rovio had done the rounds just before us. But apart from that, I don't worry."

So, continuing the analogy, will ZeptoLab, currently 54 staff, grow as Rovio, with over 300, has?

"We actively try not to get too big. Small is the new big," he emphasises.

And, to end where we started, this feeds back into his CEO role.

"We are a transparent company," Lyalin says.

"There is no management layer to get in the way. There is no politics. When you get big, planning becomes topdown and that's wrong.

"As CEO, I try to expose my decision making to the company. But it's not about power. You don't force people to do what you want. You drive them to be successful."