Plus, iOS exclusivity is only timed

The candy-eating star of ZeptoLab's enormously successful Cut the Rope franchise - with cumulative downloads of 400 million and counting - went missing in October.

After a carefully co-ordinated social networking campaign in which the Moscow-based studio dropped subtle hints as to Om Nom's whereabouts, the sweet-toothed critter returned 'home' just in time for the upcoming launch of much-anticipated physics-puzzler Cut the Rope 2. How convenient.

At a suitably secret location in a corner of South West London, we sat down with ZeptoLab CEO Misha Lyalin to find out whether his studio felt under pressure to deviate from the hitherto ultra-successful candy-cutting formula in this fresh instalment.

Oh, and to find out exactly why ZeptoLab is launching Cut the Rope 2 exclusively on iOS.

Pocket Gamer: The makers of other major franchises, such as Angry Birds, have shied away from releasing direct sequels to their big hits. How difficult a decision was it for ZeptoLab to press on with a full-fledged sequel to Cut the Rope? Misha Lyalin: We thought it was time to introduce whole new mechanics and fresh layers of interaction. We wanted players to interact with Om Nom more.

This time around, you see, he's animated completely. You can move him around, poke him, all sorts of things.

Furthermore, we've introduced challenges on every level, medals to collect, power-ups, secret levels, solutions, and, of course, some friendly 'helpers'. We've designed this game with both puzzle novices and puzzle veterans in mind.

Did you feel much pressure during the development process of Cut the Rope 2 given that Cut the Rope is now such a massive IP?

Not really. We have so much up our sleeves.

I don't think it's a matter of pressure. We just see it as an opportunity. A chance to make something new. We are proud of the series, and are ready to take it forward again.

How are you planning to monetise Cut the Rope 2?

We're going to launch the game exclusively on Apple's App Store on December 19th for 69p or 99c. As a limited-time promotion.

In terms of in-app purchases, you will be able to buy power-ups from an in-game store. Saying that, you don't have to buy them - you can win them, too. Oh, and you can complete the game without the power-ups. You'll also be able to dress Om Nom up.

What's behind the decision to launch Cut the Rope 2 exclusively on iOS?

We want to give as many people as possible the experience they had before [with the original Cut the Rope game on iOS].

After some time, it will be available on Android. And it will be a free-to-play game on Google's mobile platform.

Are you concerned at all about alienating existing fans of the series with any substantial changes to the gameplay?

We always have to strike a balance. But we think that anybody who enjoyed Cut the Rope will enjoy Cut the Rope 2. There's more variety in this sequel. More things to do. More ways to unlock levels. 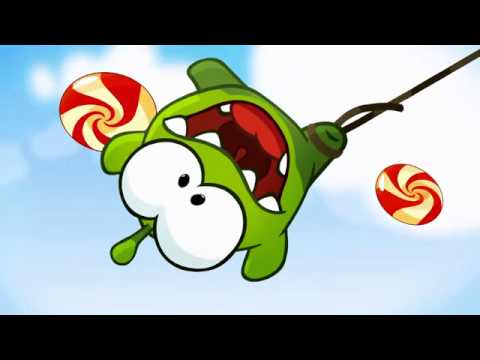 Plus, we've listened to the feedback from our community. People have been saying that they want to interact with Om Nom more.

Well, you can now poke him, prod him, spin him around. He's like a virtual pet. Not a full-fledged Tamagotchi, sure, but he's getting there.

When should we expect to see Cut the Rope 3?

We have a lot of things in mind. When we finished Cut the Rope in 2010, we didn't actually think there was much more we could probably do with the game. How wrong we were.

Since then, we have come up with so many new mechanisms, designs, elements. This franchise has got a lot more legs, trust me.

Cut the Rope 2 will hit Apple's App Store on 19 December. Check our sister site Pocket Gamer for a review of the game soon after.
Next Up :
Fantasy Town Diary: Days 2-4 - more citizens, more style, and fresh bread