Mario's dinosaur pal Yoshi has been drawn in many different graphical styles over the years. He's been done up in cardboard, fabric, bits of yarn, watercolours, crayons, felt-tip pens, and plastic.

But while I was playing an early preview build of his latest game - the upcoming Yoshi's New Island for 3DS - I struggled to put my finger on the exact art style that Nintendo's going for.

Thanks to the combination of painterly graphics with 3D models and crumpled edges, it almost looks like everything's been made from cute papier-mâché models. I've no idea whether that was intentional, but it certainly fits the stereoscopic 3D.

It can be unsightly, however. The models look blobby and undefined, and the different layers of 3D blend poorly. Some platforms look like they sit too far back in the distance for Yoshi to even stand on.

Still, that style will change as you play through the game, according to Nintendo, and different worlds will be dressed up in different designs, including more traditional themes like oil, watercolour, and crayon. 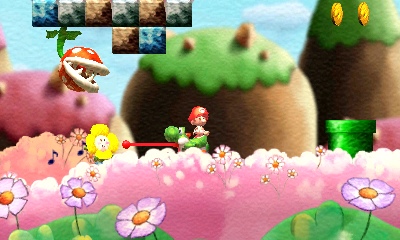 So the visuals may be different, but the gameplay certainly isn't. Despite the "New" in the title, this game leans very heavily on Yoshi's first outing, and when a fellow journalist asked me if this was actually just a quick 3D remake of the SNES original, I could only shrug.

I mean, stages have Yoshi transporting a nappy-clad Mario through various pastel landscapes, while fighting off walking flowers and shy guys. If the dinosaur gets hit, Mario will float off in a bubble - bawling his eyes out, and screaming at the top of his lungs - giving you a hurried 15-second opportunity to save the hero-to-be from danger.

Plus, Yoshi can use his tongue to grab enemies, stuff them in his gaping maw, and turn them into eggs. These then become projectiles, which you can fire at baddies, far-off switches, and other such targets. 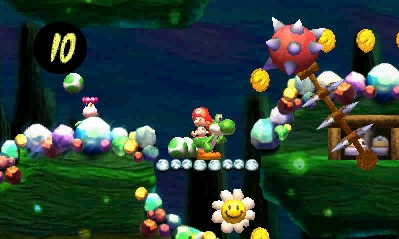 So far, so Yoshi's Old Island. But delve a bit deeper and you'll find some new ideas. In certain levels, Yoshi can pick up an enormous great egg and use it to smash through impenetrable walls to gain access to coins and secrets.

You can also pick up binoculars to get a broad view of the level, and spy hidden bonus items. That will certainly help out secret chasers and completists.

But in the handful of levels I played, that's all I could find of interest. The short hands-on demo had absolutely nothing to convince me that I need to buy this game over dusting off my old SNES cartridge and play the peerless 16-bit original. That said, if you don't have access to a SNES then this is probably the next best thing.

Yoshi's New Island developer Arzest, which was formed by key members of Yoshi's Island DS creator Artoon, desperately needs to come up with something other than fancy graphical styles to grab our attention. And it has until 2014 to do it. 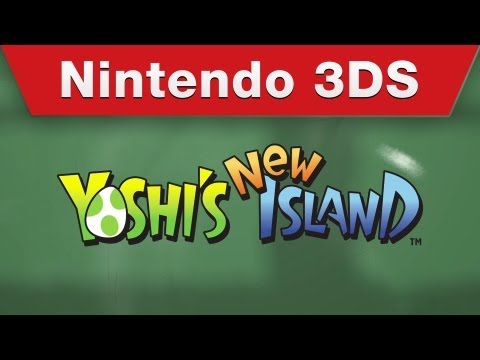 Subscribe to Pocket Gamer on
Next Up :
Noah's Heart first impressions preview - "Puts the 'massive' in 'MMORPG'"