Yoshi's New Island will be out on 3DS this week, and will once again put Nintendo's weird green dinosaur who poops eggs in the spotlight.

Since his debut in Super Mario World, Mario's prehistoric pal has appeared in a bunch of games. Yep, Yoshi is a regular participant in Mario's various kart races, tennis matches, golf tournaments, and underground fighting matches.

For this History in Handheld retrospective, we'll only feature games that bear Yoshi's name and, as is our remit, only include games on handheld. 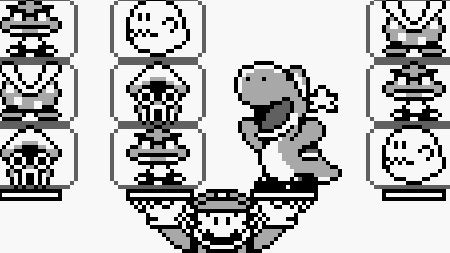 You don't actually play as Yoshi in Yoshi, but I think the name 'Yoshi' gives Yoshi the right to appear on our Yoshi list. Yoshi.

It's a falling block puzzler in which you have to exterminate monsters and match up Yoshi's eggshells. Unlike, say, Tetris, where you manipulate the falling blocks, in Yoshi you swap the stacks at the bottom of the screen.

Different, then, but decidedly average. It's repetitive and simple and only really noteworthy for being one of the first games developed by Pokemon creator Game Freak. 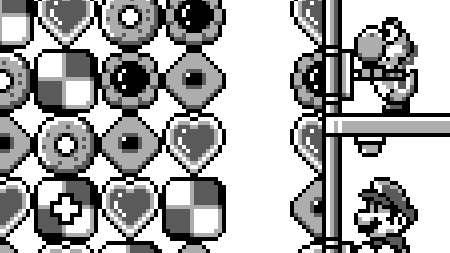 Another puzzle game... but this one barely has any connection to a Mario game. Here, Yoshi's Mario baddies are ditched in favour of Jammie Dodgers and Rich Tea fingers.

It was actually quite good, and the levels in Puzzle mode were apparently designed by Tetris creator Alexey Pajitnov.

Still, while Yoshi's days of puzzle solving were over, it would be ten years before the cute Velociraptor had another game to call his own on handheld. 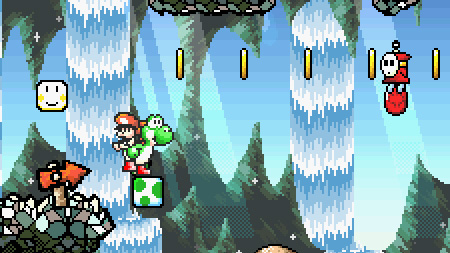 Yoshi's introduction to the world of Mario was purely accidental. He just happened to be in the exact spot where baby Mario fell when Kamek grabbed - and dropped - the infant plumber.

Being the sort of heroic dinosaur that he is, though, Yoshi chooses NOT to dump baby Mario in a bin or drop him off at an orphanage. Instead, Yoshi carries his new-found charge to rescue baby Luigi and deliver the brothers to their parents.

That's the setup to cracking egg-slinging Super Nintendo platformer Yoshi's Island, which would be re-released on Game Boy Advance as Super Mario Advance 3: Yoshi's Island in 2002.

There's so much to say about the brilliance of Yoshi's Island that it'd be impossible to fit it all in here. Like the crayon and felt-tip aesthetic; the way the map music adds more instruments the further you get; and the massive boss battles that pushed the SNES to its limits.

Or just the simple joy of gulping down a Shy Guy; immediately pooping him out as an egg; and then ricocheting that egg off the wall so it bounces into and kills the Shy Guy's pals. Magic. 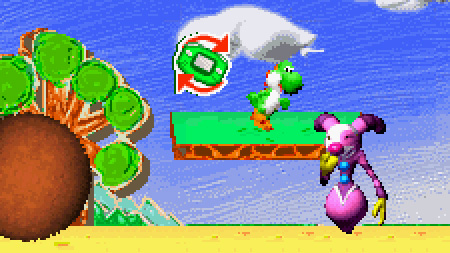 Nintendo became obsessed with tilt sensors in the mid-2000s when it released the excellent WarioWare: Twisted! and the truly mediocre Yoshi's Universal Gravitation.

The idea at the heart of the latter game certainly had some legs. By twisting your Game Boy Advance like a tiny plastic steering wheel, you would change the game's gravity, causing enemies to fall over, obstacles to be displaced, and swinging pendulums to start moving.

It also had a clever system where each world had a different spirit whose demands would change the nature of the game. A money-loving spirit would only be happy if you collected coins, while a speed freak stuck a tight timer on each level.

Sadly, Yoshi's Universal Gravitation just wasn't very good. The tilting effect was clumsy and ungainly; the level design was dull; and everything was pretty darn ugly. Strike one for developer Artoon. 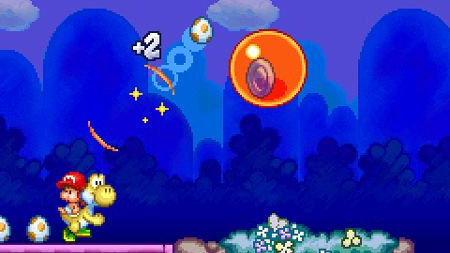 This game was ahead of its time. I mean, it certainly wouldn't look out of place on an iPad.

It was an early auto-runner in which Yoshi dutifully plodded through the stage on his lonesome, leaving you to draw platforms out of clouds; disarm enemies with bubbles; and tell Yoshi when to jump, flutter jump, and fire eggs.

Like a lot of games on this list, it was simply 'okay'. It certainly suffered from the console launch game curse, and was a bit flimsy and insubstantial. Given Touch & Go didn't have a story mode and there was little to do other than chase your own high scores, the fun here was short lived. 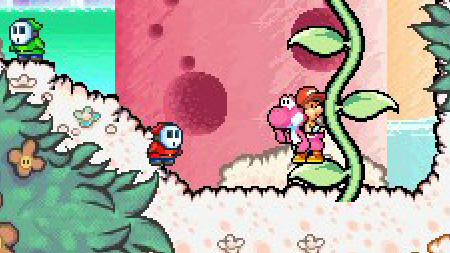 To be fair, Yoshi's Island DS was a much better game than Yoshi's Universal Gravitation. Most notably, it introduced new characters like Baby Peach, Baby Donkey Kong, and Baby Wario, who each gave Yoshi different powers and puzzle-solving tools.

And while the game didn't make much use of the DS's unique input doohickeys, the twin screens did let players see more of the world in one glimpse.

Once again, Yoshi took an extended break and hasn't had his own game in years. That will change this week, and we'll have a full review of Yoshi's latest game up on the site on Thursday.