By Catherine Ng Dellosa
| May 23

Awesome Games Studio has announced the upcoming launch of Yet Another Zombie Defense HD, landing on iOS devices across the globe on June 23rd. The premium survival game tasks players with trying to hold out for as long as they possibly can during the zombie apocalypse as hordes of the undead close in on them to devour their brains.

In Yet Another Zombie Defense HD, players can expect a high-quality port that features online co-op as well as leaderboards and achievements to aim for. The game also received positive feedback when it launched in 2017 on consoles.

The top-down zombie shooter boasts intense tower defence elements that let up to four players dive into the darkness via local and online co-op. Players can build their defences during the day and prepare for the hordes of the undead by nightfall. Defensive items range from sturdy barricades to turrets and guns, with a wide variety of choices players can pick to add to their arsenal. The game features different modes as well, which include Defense, Endless and Deathmatch. 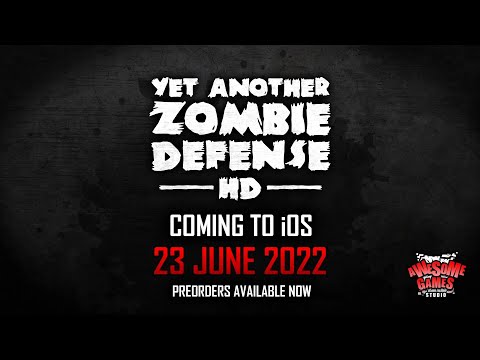 If you're keen on joining in on the fight for survival, you can pre-order Yet Another Zombie Defense HD on the iOS App Store ahead of its launch next month. It's a premium title that costs $2.99 a pop or your local equivalent. You can also join the community of followers on the game's official Twitter page to stay updated on all the latest developments, or take a little sneak peek at the embedded clip above to get a feel of the title's gameplay, mechanics and visuals.

Are you on the hunt for more similar titles that will put your skills to the test on your mobile device? Why not take a gander at our list of the top 25 best tower defence games for Android phones and tablets?

Next Up :
Infinite Lagrange's future update based on the Legacy concept was showcased at NetEase Connects 2022

Trailer for upcoming twin-stick shooter Yet Another Zombie Defense