Pride Month celebrations have begun and everyone is banding together to celebrate the LGBTQIA+ community. Riot Games is joining in with this commemoration within their games and in the real world as well. As we keep progressing as a society, it becomes increasingly important to create awareness and inclusivity for everyone. 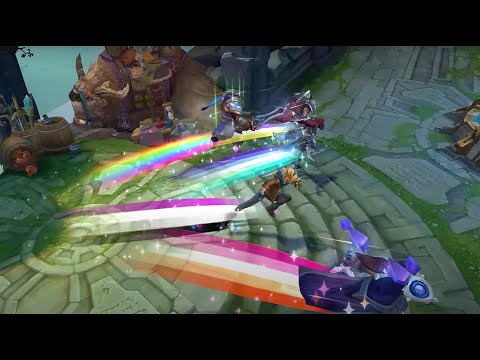 Celebrating Pride Month is not something new at Riot Games. Back in 2018, the creation of the Rainbow Fluft gave queer players a permanent representation and it has only grown since then. Icons, artwork, emotes, and so much more, all in support of the LGBTQIA+ community. The goal has always been to enhance the cohesiveness of gaming without looking at gender. Everyone is welcome!

The colours of the rainbow that make up the Pride flag will be seen pretty much in all of Riot’s games. Be it League of Legends, Teamfight Tactics, Legends of Runeterra, LoL: Wild Rift, or even Valorant, each game is celebrating pride in its own special way. Just like how everyone is unique, so will each game’s way of honouring the community. It is exemplified in the Pride 2022 Gameplay video embedded above.

Players can expect to see the addition of new icons, trails, player cards, and a lot more. The party isn’t just limited to in-game events but the love also spreads to the esports leagues as regional broadcasts are joining in. Riot Games takes diversity and inclusion very seriously and always aims to create a safe space without boundaries. As a result, they were regarded as one of the Best Places to Work for LGBTQ+ Equality in 2022 by the Human Rights Campaign.

Rioters, as they like to call themselves, will also be taking part in in-person events, parades, tournaments, and so much more. The party is just getting started. As time progresses, maybe the tale of two individuals from Bilgewater will also be revealed.

Also, check out this week's list of must-play games!
Next Up :
Diablo Immortal teams up with Backbone to offer players a free Adventurer's Pack