Where's Samantha? is an adorable puzzle-platformer about reuniting two sentient swatches of fabric that have been separated from one another. It features 45 levels where the difficulty slowly ramps up, required increased brain power to match. We decided to hand the game over to our App Army to see if they could get these woolly lovers back together.

When I won the code to review Where’s Samantha, I was both excited and worried. Excited because I find physics puzzlers particularly enjoyable, and one set in the world of fabric and yarn is right up my alley! I worried because the word “platformer” appeared in the description, and I am downright rubbish at platformers.

I needn’t have worried! Where’s Samantha takes an easy difficulty ramp-up approach combined with plenty of save points. Even so, there are several areas where you can find yourself at a dead-end, stuck with seemingly no way back to pick up missed items. I found that for those you should either find a way to kill yourself so you’ll respawn at the nearest checkpoint, or finish the level then replay it from scratch to get what you missed.

The game is simply delightful, very forgiving, and the controls (finger or controller) easy to use. The narrator has a wonderful voice, and the developing story is entertaining. This is a family-friendly game that works, and works well!

My suggestions for improvements are minor:

Well, hello there gorgeous! I wasn't sold on the screenshots at first sight, but then I opened the game and my chin dropped. What a wonderful charismatic puzzle platformer this is. Let me just put one thing out of the way first. If you loved Thomas Was Alone, you will definitely like this one, oh yeah. Both of them have the most fantastic narrator that gets you completely involved with the story and gameplay, and you just want to hear more about it. Graphics, parallax effects, animations, what a delight, so much attention to detail.

The characters (yes, there are more than one) are delightful and lovable, and the mechanics of the game is just brilliant. I got hooked on the first level, and then the second, third, etc, etc. You'll learn more tricks the further you go down the line, with new characters to play, and mix and match between them to get new powers/abilities so you can finish a level. There's a lot of real-world physics involved, and you have to try things out to understand how to go forward.

A wet cloth is heavier, so beware of steam, or use it to your advantage. The soundtrack and sound effects are also top-notch, and gameplay works very well with the touchscreen controls. I also tried it with a Bluetooth controller, and it gains even more points like that. Such a beautiful game this is. I am completely sold, and it's now side by side with Thomas Was Alone on a folder on my iPhone.

I have to admit that I was not enthused when I started this game. The book and slow reading and small print. But what I found at the heart of it was an imaginative game with mechanical elements that I’ve enjoyed in other games. This, together with simple and effective controls, cute characters, appealing graphics and voice talent make Where’s Samantha?, to me, more fun and charming than a frustrating platformer. I’m a fan. 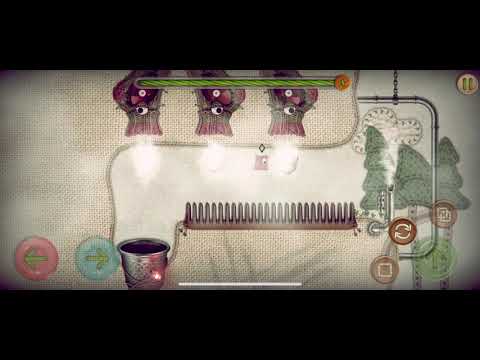 “Where’s Samantha?” turned out to be a really nice surprise. Every so often an app comes along that just looks like it’s worth taking a chance on, and “Where’s Samantha?” is just that. It’s always great to see a game designed for PC/console fit so well on mobile. This is a physics-based puzzle platformer that does just about everything right. While the play style invokes the great “Thomas Was Alone”, the charm of the hand drawn graphics took me back to EA’s beautiful “Unravel” series.

The puzzles presented here will definitely catch you at times, but the frustrations are alleviated with numerous checkpoints and instant restarts upon death. Just as great as everything looks, the storybook setting stands out thanks to the wonderful narration by actor Rufus Hound. In order to complete the pages of this tale you must collect various letters scattered throughout the stages. This love story along with some adorable characters gives you a reason to keep playing and that I’m all for!

George was Alone, plucked from Love’s complacency toward completing menial obstacle courses by fate’s harsh winds. He must prove his love by overcoming a series of challenges through which game mechanics are gradually introduced. The primary game mechanic involves George separating from himself, or condensing into himself in order to solve cabbage/rabbit/fox type scenarios. Some platforms or doors only respond to George at higher masses, while other platforms drop out under heavy weight.

Size is also a factor, with one puzzle requiring George to push his disembodied half through a tunnel with roof spikes because assimilating it would make him too tall. Controls are not as sharp as VVVVV or Kalimba (which I was often reminded of in the way some mechanics work) but they are smooth enough, and you quickly get used to George’s slight clunkiness. I enjoy the puzzle design and central mechanics well enough, but the star of the show is the intersection of visual style, music, and excellent narration. The game’s charm elevates it. If you enjoy puzzle platformers and you’re looking for a nicely polished title I can recommend Where’s Samantha.

Where’s Samantha? is an arcade puzzler where you must guide your scrap of fabric (George) across multiple levels in search of another scrap of fabric (Samantha). Along the way you will pick up balls of wool that increase your weight and allow you split George up, which can then be used to solve increasingly complicated puzzles. The audio narration between levels gives this game a ‘Thomas was Alone’ vibe. The game is well presented but slightly let down by the woolly keyboard controls. However generous checkpoints and quick restarts reduce frustration. This is a really fun game and well worth checking out.

This game is perfect for anyone who likes a really good puzzler. There is all the usual jumping from object to object, collecting items (in this case alphabetical letters), moving through obstacles and there is a storyline to follow.
The thing that makes this game a cut above the rest is the changing of weight and colour to progress. If an object is pink then the little fabric square called George has to be pink to fully utilise it, or if it’s blue then the same principle applies. Splitting in half can also aid the weight or colour problems. This game is ideal for those times when you want to immerse yourself for a while in a good mind challenge.

Where’s Samantha? is a super cute game where you go on a journey with a piece of fabric named George to find another piece of fabric named Samantha. It is a physics-based puzzle with simple controls that allow you to move in four directions or jump from section to section. The overall vibe of the game is similar to the Unravel series for PlayStation, and it is a high-quality game. Even though I rarely play games with audio on, I found the soundtrack and the narrator’s so catchy that I kept the music on for the whole time. To summarize, I had a lot of fun playing this game, and I highly recommend it for children and adults alike

When I started playing this game, I was immediately struck by how sluggish everything felt. Movement in this game is slow and cumbersome, and while that might work well in some games (e.g. the Mooseman), it requires strong support from the other elements. The Mooseman worked because of its atmosphere, beauty, and soundtrack. I did not find any of these appealing in Where's Samantha. The visuals struck me as kitschy and overindulgent. The premise, that of playing as a sentient scrap of yarn, seemed to me rather gimmicky as if the developers expected the oddity to provide the main draw of the game. See Dadish for another example of this. The story itself was pretty generic and played out at this point. Going on a quest to save a kidnapped/missing loved one is a trope I'd rather never see again. Overall, it just isn't for me.

Where's Samantha? the physics-based, story-driven puzzler is out now on Android and iOS

Where's Samantha? is heading to Android and iOS after success on PC and Switch, now available for pre-registration

Where’s Samantha is a physics based, story driven, puzzle platformer coming next month on Android and iOS