Lilith Games has announced that the new global ambassador for their strategy title Warpath is none other than The Muscles from Brussels, Jean-Claude Van Damme. His arrival coincides with the game's latest update, Air Force, which, as the name implies, introduces a host of advanced aerial units.

In total, the Air Force update adds over 40 new air units for players to obtain, upgrade and send into battle. Among numerous other units, players can now command the legendary American P-51 Mustang and the recognisable British Avro Lancaster bomber. Alongside new aircraft, players can now recruit aerial aces such as Jean Dufort and Doris Morgenstern as Officers. 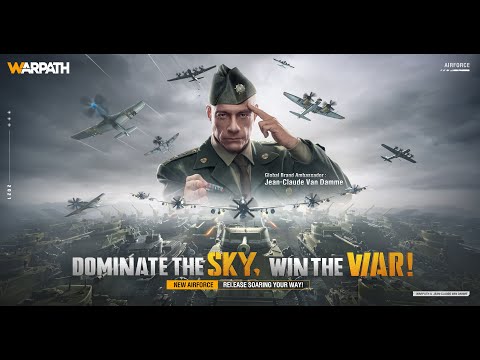 Lilith Games hopes that the addition of aerial combat alongside ground warfare will open up an array of new tactics in Warpath. Elsewhere, players can enjoy new upgrades with the addition of new base-building features that will help keep their forces' skills sharp.

And Jean-Claude Van Damme is the face of this new update. To commemorate the occasion, Lilith Games has released a trailer featuring the 80s action star, which you can check out above. He's certainly an appropriate choice given he's starred in numerous action films over the years like Universal Soldier. Although I suspect, most younger folk might recognise him more readily as the bloke from the Coors Light adverts.

It's certainly not the first time Lilith Games has teamed up with a well-known celebrity to help advertise their game. Another of their popular titles, AFK Arena, has had collaborations with the likes of Elijah Wood and YouTuber Markiplier.

Warpath is available now over on the App Store and Google Play. It is a free-to-play game with in-app purchases.

On the hunt for more excellent strategy games? Here are 25 of the best available for iPhone and iPad
Next Up :
Words with Friends partners with Lady Gaga's Born This Way Foundation for #BeKind2021 campaign

Warpath codes and how to redeem them: May 2022