From election loss to impeachment...what could happen next?

This week's main event in Washington DC is the second impeachment trial of former president Donald Trump, so the makers of Viral Days have just released a special "Viral Leaders Impeachment Edition" for iOS and Android to put their satirical spin on the whole affair.

Viral Leaders opens up with Donald Trump stalking the White House, dreaming of a second presidential term. Since he's been kicked off of Twitter, he's taken to announcing his opinions to complete strangers on the streets. The game doesn’t hold back in its mockery of the former president, featuring dozens of outrageous remarks like “Melania social-distances from me” and “Miss my nuclear button”, as well as a few doozies that were said in real life.

Viral Leaders also takes aim at a few of Donald Trump’s more notorious alleged supporters too, with the iOS version featuring a bare-chested character sporting a horned helmet, that shares a striking resemblance to the infamous “Bison Man”.

The gameplay objective is the same as in Viral Days; keep the population healthy in the midst of the COVID-19 pandemic. You can distribute masks, hospitalize people and send infected persons to quarantine.

The game is divided into three segments called "days". On the second day, a cartoony version of British prime minister Boris Johnson also makes an appearance in the game. The PM isn’t spared from Viral Leader’s lampooning either, as he too gets the Trump treatment with his very own set of funny statements. 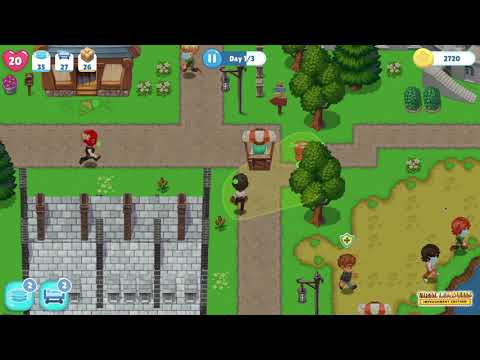 You’ll also have the option of sending both Boris Johnson and Donald Trump home...which is probably the safest place to be, all things considered.

Effectively a demo version of Viral Days, Viral Leaders provides an easy introduction to the full game. You can find Viral Leaders available to download for free from the App Store and Google Play.