Vestigium is an upcoming memory puzzle game from Tepes Ovidiu that possess an absolutely gorgeous art style. Some of the screenshots for the game look like they could be pieces of art rather than screencaps, it's very pretty basically. And you won't have to wait long to play it, it will be available on 24th September for iOS and Android.

Vestigium tells the story of a girl called Qirie and her wisp buddy as they head out on a journey to collect magical lotus flowers that can cleanse her home from evil after it was infected by a dark poison. The name of the game is a Latin word which means footstep or trail. This is a very fine name choice given the gameplay on offer. 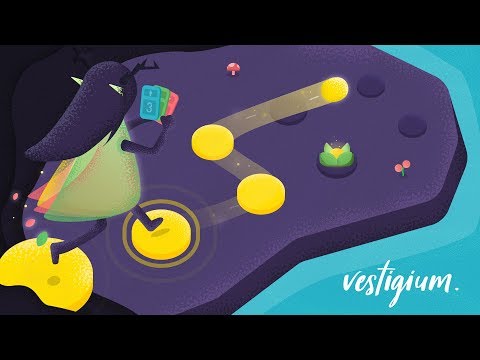 Most levels will see Qirie guided through the level by her wisp friend. The wisp will float across various circular platforms and you will then have to memorise the path it took and lead Qirie that way. You'll do so by playing cards that will have a direction and a number of steps. It sounds simple but that's not necessarily a bad thing, though I am interested in if there are any other elements to it.

The game will take place across 48 levels that take Qirie to a variety of environments from swelteringly hot deserts to chilling snowy locales. The developer also says it will be a heartwarming story which I can totally see from the art style. It just has a look that invokes warm fuzzy feelings so if the story is the same that's great.

Vestigium is heading to the App Store and Google Play on 24th September and you can pre-order it now if you're as sold on the beautiful art style. It will be a premium game that costs $1.99.

Check out our news section to discover the latest, and greatest, games.
Next Up :
FORESTOPIA is welcoming dogs and cats into the cosy island sim in its holiday-themed winter update

Vestigium is a relaxing, heartwarming puzzler for iOS and Android