Whether you're a combo-inducing maniac or you just like mashing pads and appreciating character design, fighting games are the perfect genre to pick up and play when you have only a few moments to spare.

With its fantastic D-pad, sharp screen, and amazing battery life when playing PSP and PSone games, the PS Vita proves to be a veritable treasure trove when it comes to the wealth of fighters available for it.

Thanks to modern technology, you can nab almost all of these titles in this list digitally from the PlayStation Store, meaning you'll never run out of combos to learn.

If you ever needed proof that the PS Vita is the console every fighting game fanatic should be carrying in their back pocket*, this is the list for you.

*Note: please for the love of god do not carry a Vita in your back pocket. Dead or Alive 5+
By Team Ninja / SEGA AM2 - PS Vita

Love it or hate it for its bouncing bosoms and titillating attire - the reversal system, multi-level stages, and gorgeous graphics make for a dazzling fighter.

It hasn't got the roster of Dead or Alive: Dimensions, but with Virtua Fighter's Akira, Sarah, and Pai, it's the closest experience to a decent portable Virtua Fighter there's ever been.

The two titans face off at last in a tremendous tag-team fighter with the 12 DLC characters from the console and PC versions included by default, plus five Sony-exclusive characters.

Tekken fans may be disappointed by the Capcom-flavoured control system, but hey... maybe Tekken X Street Fighter will come out one day. Right guys? ...guys?

The King of Fighters '96
By SNK - NEOGEO Station

With the fan-favourite The King of Fighters '98 missing from the PSP line-up, this might just be the next-best available option for anyone wearing nostalgia-goggles.

The King of Fighters '96 introduced major gameplay elements to the series, paving the way for the series as we know it today. Best soundtrack, bad-ass boss team, and final boss. Go Goenitz!

The most complete version of this stunningly solid game. It includes the World Tour mode from earlier console versions, the GBA port's three extra Capcom vs. SNK 2 characters, plus a bonus character: the rarely-seen Ingrid from Capcom Fighting Evolution. Plus, the ad hoc multiplayer still works a treat!

It may look a tad ropey, but there's just so much content in this package that it's bloody stupid. Everything the console 'Komplete Edition' has to offer, plus even more costumes, and an insanely addictive (and often loony) Challenge Tower mode. Yes, yes, you can pit Kratos against Freddy Krueger too.

Two fondly remembered 3D arena battlers for the Dreamcast bashed together to form a delectable anthology package. This collection has been optimised for widescreen, with characters formerly missing from each game reintegrated. Even the bonus little VMU minigames have been included!

Power Stone 2's frantic 4-player ad hoc multiplayer is the main attraction though, where you'll use weapons, traps, and super-powered mega moves to defeat that most loathed enemy of all - friendship. 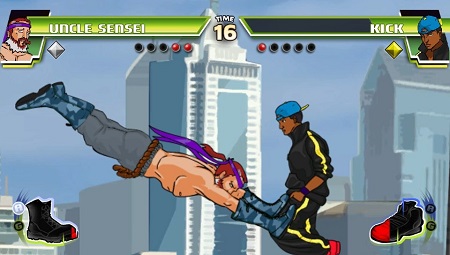 With adult swim animation stylings and a similarly odd taste in humour to boot, this two-button fighter brings the genre back to basics: first strike wins. With such a simple premise and in-jokes for the fighting game community, it's well worth giving this tongue-in-cheek parody a chance.

This much-overlooked launch title for the PSP remains the flagship title for the Darkstalkers series. Think Street Fighter for goths. Sigh, yes, it's "that one with the succubus and cat characters from the vs. series what have the boobs."

An amalgamation of every game in the series, with the full character roster and every fighting style, ending, and piece of music available.

A newer, lesser-known series in the West, Arcana Heart's calling card is in its customisation. After you choose one of the game's 23 characters you're prompted to select one of 23 Arcana. These mystical beings, based off the tarot, allow you to tailor your focus on attack or defence, as well as what special moves and passive effects you have available to you.

The Vita version comes with rebalanced gameplay, new survival and training modes, and... er... some rather awful loading times to be honest. The game's only out in Japan at the moment, so you'll have to import the physical copy for now. It is, however, due for a US release this autumn.

Despite the digital version of the game having been removed from the store, the lovingly ported Vita version still has pride of place on the unit. You'll just have to save your card slot for it and weep that you can no longer have DLC characters Shuma Gorath and Jill Valentine on your team.

This is the only version to include the heralded Replay mode, which allows you to painstakingly assess just where you went wrong in your last match - frame by painful frame, if need be. 48+ utterly awesome characters from two very rich back catalogues. Do I really need to say more?

Did we miss something? Too much Capcom? Wanna fight about it? Let us know in the comments section below!
Next Up :
How to install an emulator on iOS