Can you play a match-3 and a shoot-'em up at the same time?

Toybox will test your abilities

But E3 seems like a long time ago now (although my jetlag remains fresh).

I'm still working my way through the myriad of games I saw at the show, and one that really stood out was Toybox.

In development from two-man team Barrel of Donkeys (split between Melbourne, Australia and London, UK), it's a typical indie mixture of fresh art style and gameplay.

It also has an audio soundtrack that reacts to the way you play.

Taking the mash up approach, Toybox combines a simple shoot-'em up with match-3 mechanics. But the neatness of combination is that both elements happen simultaneously. 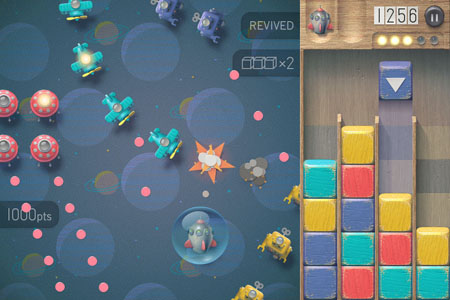 Performing match-3s will power up your spaceship.

Of course, both games are fairly simple in themselves, but the combination of the two at the same time - it's like tapping your head and rubbing your belly - means you really have to stay alert.

In terms of adding more variation, Barrel of Donkeys says it will release new waves of incoming enemies and challenges on a weekly basis.

Toybox is due to be released sometime in August for iPhone and iPod touch.