Interview: KyungHyun Son talks about what The Walking Dead All Stars brings to the collection RPG genre

The Walking Dead All Stars is the latest game based on the franchise to arrive on mobile. It's a collection RPG, meaning you'll be gathering a team of characters from the show and using them to hold back the zombie hordes. If that sounds like your kind of thing the game is now available for iOS and Android.

We recently spoke to FUNLOW's CEO, KyungHyun Son about The Walking Dead All Stars. Together, we discuss what sets the game apart from similar entries in the genre, how players will progress and what the future holds for this RPG.

Could you please introduce yourself and your role on The Walking Dead: All Stars for our readers?

My name is KyungHyun Son, and I’m the CEO of FUNFLOW. This is our seventh year partnering with Com2uS Holdings, and we’ve worked on three projects together, including Kritika: The White Knights, Heir of Light, and now The Walking Dead: All-Stars.

There are already several games based on The Walking Dead. What do you believe sets All-Stars apart from the rest?

We’ve always wanted to write a story about communities of people dealing with life in a post-apocalyptic world, which is why we ultimately chose to create a collection RPG centered around the very characters who inhabit that world. We went above and beyond to add plenty of rich stories that connect these countless characters and drive the overarching plot forward. I think this is what sets us apart from other game companies who’ve borrowed similar creative material. The original IP holder, Skybound Entertainment, told us they’ve never met a team that was this passionate about storytelling.

Aside from its stories, the game’s appeal comes from the extensive research we’ve done on the universe of The Walking Dead that even the original author, Robert Kirkman, would be proud of, as well as its vivid graphics that add color and a three-dimensional layer to the charm of the original comics.

Similarly, there are numerous hero-collecting games on mobile. What does The Walking Dead: All-Stars do to stand out from the crowd?

Every character in The Walking Dead: All-Stars has an “alignment” associated with them. You could say that the efficacy relationship between alignments isn’t anything new. However, we’ve embedded the character alignments into the game’s design and story. The most common elemental relationship system of “fire,” “water,” and “forest” doesn’t exactly fit the world of The Walking Dead, which is why we gave each character an alignment from “Ally,” “Predator,” “Neutral,” and “Bystander,” which is representative of the lifestyle they live in the game’s apocalyptic world. Alignments are not only there to provide type matchups but naturally harmonize with the characters’ stories and raise the overall sense of immersion in-game. I also believe the interactions between the original characters of the comic series and The Walking Dead: All-Stars are another fun aspect of the game that players can look forward to.

What kind of progression can players expect? Can characters be upgraded or levelled up? Is there new gear you can find and equip?

The game's core content revolves around completing chapter stages in the game’s world. Players will explore the areas surrounding their town settlement in Buffalo, New York and continue to unravel more of the story. They’ll come across new areas on the map, battle various enemies, and obtain items needed for survival. This portion of the game was designed so that players can enjoy exploring the world of The Walking Dead. We also paid close attention to the background art so players can feel like they’re changing regions each time they move on to a new chapter. Characters have various potential methods to level up, including character level-up, gear equipment, gear upgrade, etc. 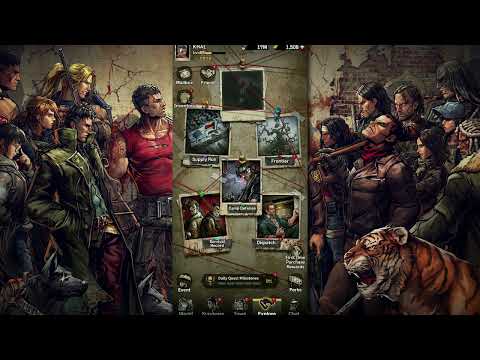 Subscribe to Pocket Gamer on
How do Joint Battles work? Do they play out in real-time, or will your friend's characters simply join you in battle?

Joint Battle is a sub-content of the Guild, in which members of the same guild attack one enemy, each scores damage, and earn rewards together. It's not a real-time battle, but the battle records between guild members are immediately shared, and all members receive extra rewards according to the best record that has caused the most damage.

Can you talk to us about the free-to-play model The Walking Dead: All-Stars will use?

In addition to its idle gameplay features, The Walking Dead: All-Stars is designed so players can clear content naturally as long as they invest enough time in the game. As such, the game’s business model focuses on growth efficiency, or, in other words, “buying time.”

Resources needed to advance characters are automatically accumulated over time. If players are satisfied with the resources they’re getting, they’ll be able to play the game without making any purchases. However, if they’d like to progress faster than their peers, they’ll have the option of spending money to acquire additional resources.

One aspect of the game that can’t be solved with time alone is “recruiting” characters. Players can earn the resources they need to recruit characters in-game, but those who’d like to get their hands on their favorite characters quickly can opt to purchase resources using cash instead.

How much prior knowledge will players need of The Walking Dead to enjoy this game? Similarly, is there anything new for fans of the comics?

As long as they appreciate post-apocalyptic worlds, players will be able to enjoy the unique atmosphere and charm of The Walking Dead: All-Stars without any prior knowledge of the original series.

By adding various elements, such as collecting characters and battling, as well as expanding the world through the addition of new characters and explorable areas, I think fans of the comics will find something new to enjoy. The Walking Dead: All-Stars takes place in the city of Buffalo, New York, a city that has never appeared in the original series. Survivors near Buffalo gather together to establish a small community and encounter a colorful cast of characters. Of course, players will also be able to recruit characters like Rick, Glenn, and Michonne, so fans of the comics will have something big to look forward to. We also created the " Asyl " community in Buffalo to have them interact with communities of characters from the original comics.

Furthermore, the appeal of The Walking Dead lies in its deep story, so we made sure to retain what makes it special by putting extra care and detail into the game’s artwork. Overall, I believe we managed to produce something that does the original series justice. The Walking Dead is loved by fans all over the world, which is one reason why we went through such great lengths to work on the game, but we also wanted to create something fun as fans of the series ourselves. We hope that fans of The Walking Dead, as well as those who wish to set foot into The Walking Dead universe, play and enjoy the game.

What plans do you have for the game after the global launch?

Since The Walking Dead: All-Stars is a collection RPG, we’ll continue to introduce even more interesting characters over time. In addition to new content, we’re planning on holding various in-game events. We’re also looking to regularly add features that help players strengthen their characters in the long run, as well as Community (Guild) content that allows players to work together and compete with each other.