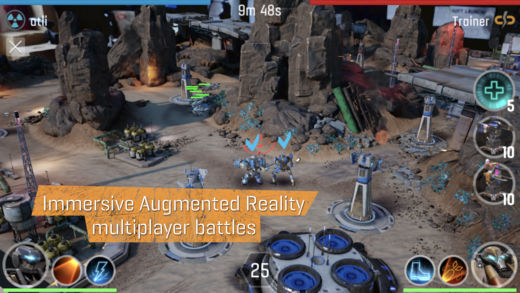 The Machines is a competitive multiplayer battler played entirely in AR, and apparently it's the first one ever.

That's right, your dining table can become a battlefield for some robots to duff each other up on. You can either play against friends locally, or online.

At review, we gave The Machines a Silver Award and described it as "A slick implementation of AR technology that's also a good deal of fun".

What's the App Army? The App Army is Pocket Gamer's very own community of mobile game experts. Each week, we provide them with a bunch of free codes and early access to the hottest upcoming games so they can provide their thoughts in features like this. We also host regular community-driven events with them in mind like tournaments, giveaways, and multiplayer evenings. To join, simply follow this link to the page on Facebook.
Next Up :
Diablo Immortal release date and the rest you need to know