Tursiops Truncatus Studios has just released a new trailer for The Day We Fought Space, the quirky shoot ‘em up - or more accurately, wreck ‘em up - that’s heading to iOS. The new character trailer gives players a sneak peek at the cast of characters in the game, as well as some exciting footage of the gameplay.

Reclaiming the solar system isn’t a one-person job, so The Day We Fought Space is giving you an able team of brilliant individuals who will fight the good fight with you. As you take on the role of ace fighter pilot Equinox, you will face hordes of wacky enemies across procedurally generated levels. You’ll have to make use of a wide variety of weapons at your disposal, which includes everything from lasers to wrecking balls. 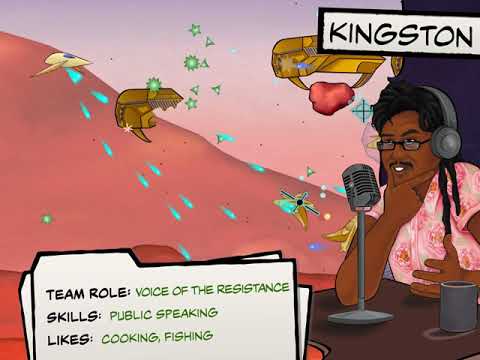 How do you take back what’s yours from pesky alien invaders? You will need to collect resources in order to research upgrades, as well as build a custom fighter drone with your handy team of resistance fighters backing you up. Take on the main campaign or engage in special challenges to unlock other missions. All these are done via physics-based gameplay, so even if everything looks zany and chaotic, there’s a whole lotta thought involved above just smashing through everything in sight.

The Day We Fought Space will soon launch on the iOS App Store for a premium price. There’s no word on an official price tag or release date just yet, but for now, you can take a peek at the embedded character trailer above to get a feel of the gameplay.

Are you on the lookout for more adrenaline-pumping action on your phone? Why not have a look at our list of the top 25 best action games for Android phones and tablets?