There's an inherent desperation to top-down, twin-stick shooters. You can see how hopelessly outnumbered you are at all times - you're a tiny speck in a swirling vortex of chaos, and the only thing between you and a grisly end is your gun.

Tesla vs Lovecraft understands that perfectly, weaving that adversity into its theme as well as its levels. Because the thing about the monsters in the Lovecraft-mythos is that you can't beat them, or even understand them, in any way known to normal man.

So I suppose it's good you're not playing a normal man. You're playing the man who invented electricity. And also fell in love with a pigeon (I'm not joking about that, seriously - smash a goog on it).

After a brief bit of narrative, you're dropped onto a small map. The stick on the left of the screen moves you around, the stick on the right aims and fires your guns. Your job is to kill absolutely everything.

Your starting weapon is little more than a pea-shooter though, especially once the game lets go of your hand and starts throwing massive numbers of dribbling ghouls to try and chew your face off.

Luckily though you've got plenty at your disposal to stop them with. First and foremost in your arsenal is a device that lets you teleport. Double tap on the movement stick and you'll zip off in a flash of lightning, reappearing almost instantly a few feet away. You've also got a super move bound to a double tap of the shooting stick. 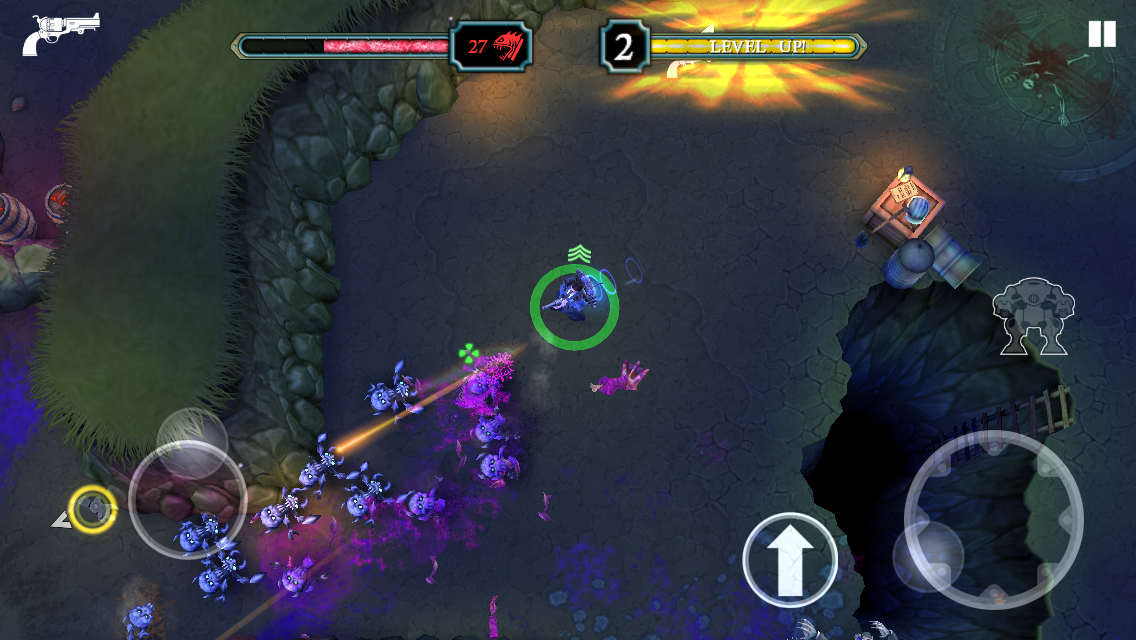 Then you've got the power-ups you can pick up. They give you extra XP, which in turn lets you unlock new perks quicker. They slow down time, or set your bullets on fire, or they're just a small nuclear bomb that kills anything on screen in a shower of horrid purple gore.

You level up during each game, and at every level you can choose one of two different perks. They stack as well, so the longer you're alive, the more powerful you're going to get. Oh, and I forgot to mention the giant mech that Tesla can build with parts you'll pick up as you jog around the map.

The game gives you all you need to win, but it never makes things easy for you. You're going to smash up against the first boss a good few times before you manage to take it down. But you'll keep trying all the same, because the action here is balanced almost perfectly between insanity and magic.

It's that mixture, that's laced through every single thing the game does, that keeps it interesting. From the theme of a slightly mad scientist taking on armies of terrifying creatures from beyond our time, right down to the swarms of beasts that bear down at you from every angle - madness and magic going hand in hand.

Fans of 10Tons other games are going to lap up everything that this one has to offer, but if you've been left a little cold by the neon-hued cyberpunk of the dev's other games, then you should still consider picking this one up.

The old ones might have awoken from their millennia of slumber, but you've got a gun that fires magic electric bullets and an X-ray sword that cleaves beasts in twain. And if you ask me that sounds like a recipe for a wonderful evening.

A wonderfully violent and perfectly challenging shooter
Next Up :
Hundred Days review - "A success for the management genre"

Tesla vs Lovecraft video hands-on - "Can a man in a mech mirk Cthulhu?"