The nerdiest top down shooter? Possibly

Tesla vs Lovecraft is makings its way from PC over onto mobile, and it should be a pretty darn good time, judging by developer 10tons legacy. The game was created by the same the folks who brought you games like Neon Chrome and Jydge. Tesla vs Lovecraft is a top-down shooter that’s looking to try something a bit different. 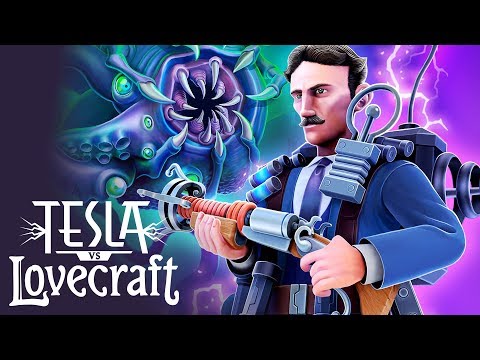 Subscribe to Pocket Gamer on
In Tesla vs Lovecraft, you assume the role of famed inventor Nikola Tesla. Times are tough for Tesla, who must use the newly discovered power of static energy to . . . destroy Lovecraftian horrors H.P. Lovecraft himself has set on the world after destroying Tesla’s laboratory. You’ll need to use your remaining inventions to save the world, mowing down any enemy that crosses your path in frantic arena shooter action. Tesla vs Lovecraft is set to launch Thursday, October 25 - just in time for Halloween. However, you can pre-order the game on the App Store for a mere £3.99 if you fancy a discount.
Next Up :
SIEGE: Apocalypse is KIXEYE's new 1v1 military battler that's out now on iOS and Android