Developer Unibyte Studios has announced its latest project, a tactical turn-based RPG entitled Terramorphers and it's available right now. Players will take on the role of their chosen hero as they do battle in various arenas and fully customize their build from the ground up by mixing and matching skills, companions, equipment, and even pets to create their own unique playstyle.

The story of Terramorphers is relatively simple, as it essentially takes place in an arena that has been set up by the Four Gods of Creation, who have gathered all of the best combatants across the multiverse to battle for glory and unmeasurable wealth. You, of course, take up the role of one of these combatants and will utilize your custom build to win said glory. 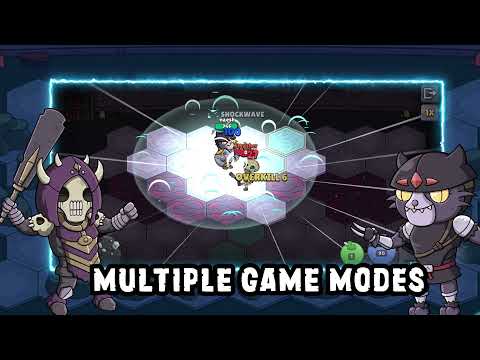 As this hero, you'll battle across various game types to experience all that Terramorphers has to offer. First up, you’ve got adventure mode, which will allow you to use controllable companions to assist you in battle against a wide variety of opponents to win more gear and upgrade points. Then, you have the Tower of Power, which is the challenge mode that will force you to use all of your skills effectively to beat a bunch of very hard battles. And finally, there’s a PvP mode as well, where you’ll face off against other players and see who’s build comes out on top.

Gameplay-wise, this is a turn-based tactical RPG, so think of games like Fire Emblem: Heroes or Final Fantasy Tactics. You’ll be giving direct orders to your character and using a wide variety of skills as well as strategic positioning, ability knowledge, counter picking, and effectively managing your moves per turn to come out on top.

If all of this sounds up your alley, you can install Terramorphers for free on Google Play right now. Currently, there’s no word on an iOS release, but you can stay tuned to the Unibytes Studios website for any update on that.

Looking to test your planning skills even further? Check out our Top 13 best free strategy games for Android!
Next Up :
HiDef has partnered with Snap Inc to create a Bitmoji music and dance game