Your iOS or Android Game of the Week - Tank Battle: North Africa

This week's votes have been counted (and recounted), and we have a winner: Tank Battle: North Africa. 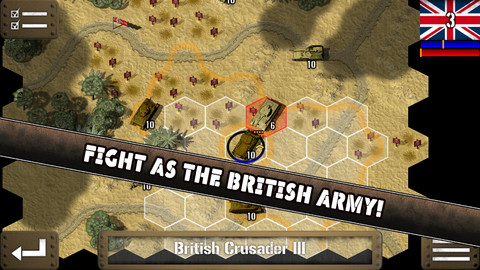 In this sequel to popular strategy title Tank Battle: 1944, you're tasked with leading the British Commonwealth and a battalion of US forces into battle against a company of havoc-causing Germans.

Your aim, then, is to wipe Hitler's forces off the face of the earth, and reclaim North Africa.

Tank Battle: North Africa features 36 different unit types, including bazooka specialists and several varieties of tank - all of which have their own unique advantages and disadvantages.

So, if you don't want to end up as brown bread, it's important that you take your time selecting units before you embark on a dangerous flanking mission or charge straight into a head-on assault.

This strategy title is packed with no fewer than 21 single-player missions, as well as six multiplayer missions that allow you to compete against your friends on a single device.

Tank Battle: North Africa is available to download from the App Store as a Universal app for £1.49 / $1.99.
Next Up :
Delete After Reading tasks you with saving a video game in a text-based adventure, coming to mobile on March 14th