Table Top Racing: World Tour - Nitro Edition made its first appearance on the gaming circuit earlier this year when it was released on Nintendo Switch. Now, it's changed lanes onto iOS devices, following in the slipstream of its predecessor.

Table Top Racing: World Tour is a combat racer where you'll race around miniature tracks with little cars. There are eight different power-ups to try and help give the edge. These can be offensive or defensive, with some offering your car additional protection whilst others will be used to damage or slow your opponents. 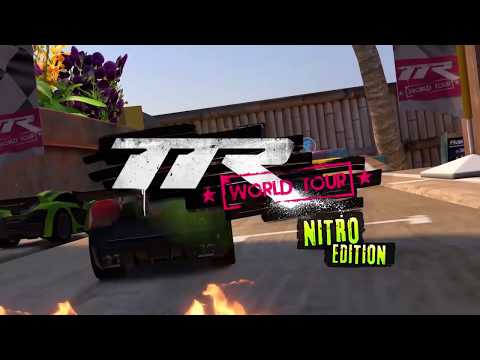 On top of that, there are also six different weapon wheels you can kit out your car with. One example of these is the classic spikes that stick out the wheels so that you can drive alongside opponent before quickly swerving into them to cause a bit of damage.

You'll also be able to upgrade your miniature rides and there's a choice of 16 cars that range from more traditional looking race cars to vans and even beetles. So there's bound to be at least one vehicle here for everyone to enjoy.

The various races on offer can be enjoyed online or offline. Up to eight players can battle it out in multiplayer races to try and claim the title of the best pint-sized driver. Additionally, the games 180 different events across the 32 table-top circuits will apparently offer over 25 hours of content

This is something Jon Mundy found in his review of the Switch version of the game, praising it for having a meaty single-player game. He did, however, find that the on-track action wasn't the best in class.

Nominate your Game of the Year for the Pocket Gamer People's Choice Award 2020.
Next Up :
Monopoly Tycoon is a city-builder simulation tycoon game based on the iconic board game, out now on iOS and Android