Google has removed dozens of Swing Copters clones from its Play store after they obscured the release of the Flappy Bird creator's latest game.

Dong Nguyen released Swing Copters yesterday, August 21st, but there were already loads of clones of his game by that time.

According to The Guardian, when Swing Copters was released on Thursday, it had been pushed down to the 63rd listed game in search results for "Swing Copters" on Google Play due to all the clones.

This was the result of Ngyuen releasing a gameplay video of Swing Copters earlier in the week.

Those looking to cash in on the expected popularity of Nguyen's latest game were able to see how the game looked and played in the video.

This game them a few days to make a clone of Swing Copters before it was even released. 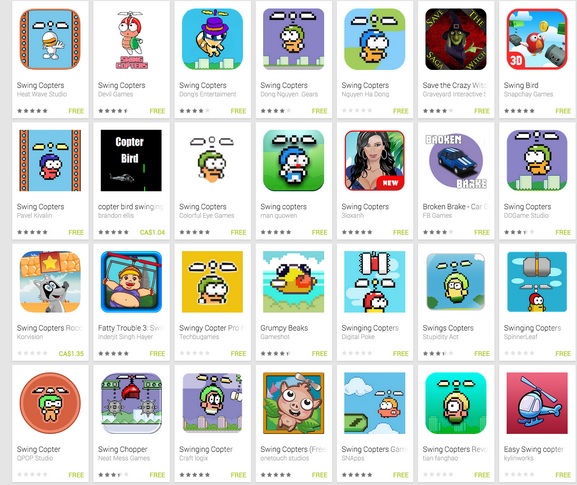 The rampancy of the clones isn't all too surprising. Due to the popularity of Nguyen's Flappy Bird earlier this year, it reached a point that there was a clone of the game added to the iOS App Store every 24 minutes.

In response, Apple and Google began to reject games with the word "Flappy" in the title. This was an effort to stop the app stores being clogged with Flappy Bird clones.

Due to this previous experience, it seems that both Apple and Google were expecting plenty of Swing Copters clones. Hence, they were prepared and able to move in on them quickly.

You won't find many Swing Copters clones (at least by name) on the iOS App Store currently. This is presumably due to Apple rejecting them when submitted, preventing them from being released at all.

Google doesn't have an approval process as Apple does for its Play store. This is why it became clogged with the clones whereas the iOS App Store wasn't.

At least Google has acted fast and removed the majority of them in the first 24 hours. Yep, Swing Copters is is now the first result when you search for the game on Google Play.

At least, it is for now.

The Guardian
Next Up :
MLB Perfect Inning 2022 adds in-game content to coincide with MLB rule changes for 2022