There are a lot of people who think iOS is a bastion for the casual gamer, that the App Store is populated solely by family friendly freemium titles, and that the only challenge on offer lies in deciding which clone to buy.

If you ever stumble across someone like this, it's your duty to introduce them to Storm Strikers from Doragon Entertainment, then sit back and watch as the judgemental smugness is burnt from their face in a burst of neon laser fire.

This is a twitching rendition of the seven circles of bullet-hell, unflinching in its monstrous difficulty, and supernova-bright in its presentation.

Dodge this, and that

There's no narrative to speak of - you're just a pilot who's taking on the rest of the universe. You control your space ship with a single finger, swiping it around the screen. Your firing is controlled for you, so all you have to worry about is dodging bullets and unleashing your special moves.

As you destroy the waves of death-spewing aliens, they drop a variety of power-ups. Stars increase the spread and speed of your weapon, gold crystals boost your score multiplier, and green gems fill up your overcharge meter, which allows you to perform a huge, screen-clearing blast.

A circle surrounds your ship, and if you kill oncoming vehicles within it you're given more green gems, and you turn the glowing plasma bolts that the offending attackers are firing at you into gold crystals.

Every time you play, you're awarded tokens. The further you get in the game, and the more stylish your play, the more tokens you can expect when you die. You can spend these either on newer, more powerful ships, or on extra 'continues' to push you further through the levels.

The way the game lets you chip away at it is interesting. Progress is measured in seconds, as you learn the patterns of your foes and make your way just that little bit further than last time. It leads to an intoxicating mix of frustration and addiction.

Boss battles in particular showcase the levels of concentration needed to succeed. If your timing's off by a second, if you weave left rather than right, you'll see your lives deplete at alarming speed.

On its easiest setting, Storm Strikers is incredibly tough. On its hardest it's a nightmare of twitch and attack, as hails of bullets, rockets, and lasers fall all around you. There's no respite, no chance to breathe until you either reach the next level or die.

The difficulty level means a lot of people won't get past the first boss, let alone make it through all seven stages. Only the hardiest pilots with the quickest of fingers will be able to navigate the warping maze of fire and attack vessels.

Those who persevere will find a shooter that rewards attrition with a glowing sense of pride. Battling through a level becomes an achievement in itself, and setting a high score an undreamed of feat.

Storm Strikers is proof, if proof were even needed, that iOS devices offer a comfortable home for the hardcore. 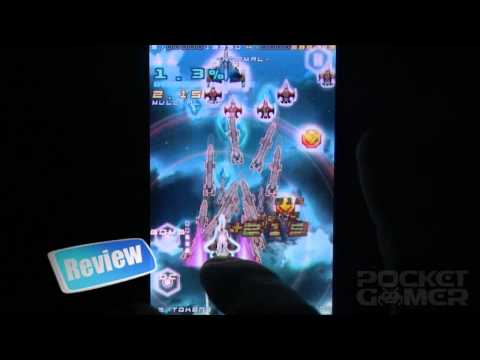 As garish as it might appear, Storm Strikers is a precision piece of bullet-hell gaming that can only add to the gaming credentials of iOS
Next Up :
Hindsight review - "Deeply emotional but a tad repetitive"