The team over at Image & Form Games have to be applauded at this point. When SteamWorld Dig first launched it was a charming cult classic that revolved around a single, simple mechanic. It was cute, fun and popular. I never thought they would spin the franchise into this behemoth.

It seems like they can do no wrong. Since Dig they gave us SteamWorld Heist, a 2D XCOM-like, and now they've delivered to us Steam World Quest, an RPG take on the steampunk robot genre. Hey, if the people like the robots, keep giving them the robots.

So this time we get turn based card battles in a new fantasy setting. Following a merry band of wannabe heroes, we see our party go from entry-level explorers, to full blown saviors of the kingdom, even if they don't act like it. 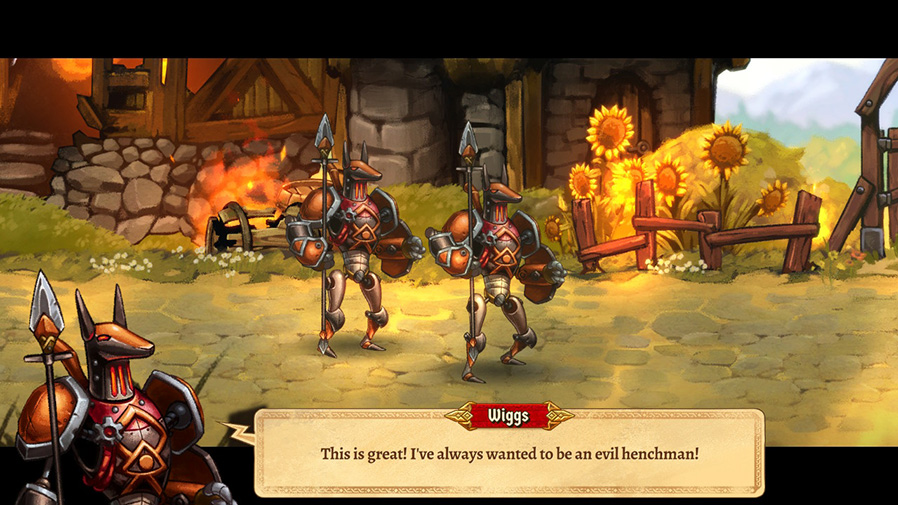 But like any Steam World game thus far, the real meat of the game is in the gameplay. People playing Dig for that addictive sense of achievement, Heist for the tactical battles, and here it's for the card based battle system.

Each character in your party has a deck of 8 cards they can use, and you will build that deck so they can do battle. Things start off simple enough, but soon you will be struggling to decide how to build your deck.

Your party starts out as a Warrior, a spellcaster and a tank/healer, though their specific abilities and how you'll use them in battle is dictated by which cards you've loaded into the deck.

And you'll have to be smart, as like in Heartstone or any other card game, there's a cost to using the most powerful cards in the deck.

Each card you play that has no cost gives you a cog for energy, you can use as many cards as you have party members, and so you'll be stacking up energy and using cards which are both expensive and as cheap as possible. Ensuring you maintain this balance in each of your decks is tricky but necessary.

Not only that, but use three cards relating to the same character in a turn, and you'll gain a special extra attack, which includes abilities like temporary shields, an extra hit, or defense boosts for your party. These character combos will quickly become essential.

Balancing out the cost of cards and aiming for character combos is where the main strategy is, and you'll be burning cards just to get the right combo with your characters. It's a fun, tactical battle system that keeps you glued in turn after turn. 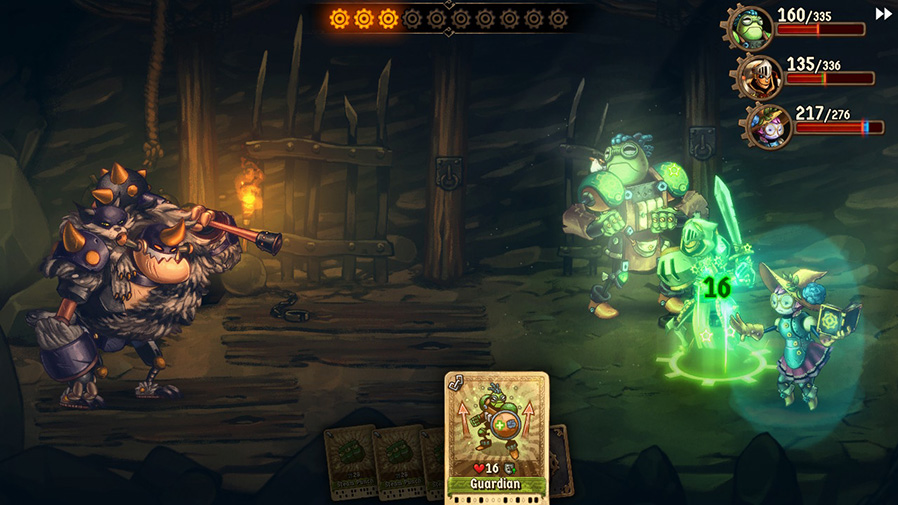 Though issues do eventually arise. You will still keep drawing cards for KO'd party members, and you are only able to burn two cards at a time, meaning you can get stuck with having only one living party member and literally no way to use any more cards.

This is the worst case scenario, and could be fixed if they prevented you from drawing cards of KO'd party members.

The areas you explore are quite bland too, rarely hiding treasure or secret routes to discover, usually just seeing you run through, battle, run through battle, and so on. It's a good thing that battle system is so fun after all, because the areas are bland.

But even then, the battle system can become tedious. You can hold ZR to speed turns up, but even then they feel like they can take far too long and become tiresome after a while, with the only way to keep things interesting is experimenting with your deck build.

SteamWorld Quest is another excellent Steam World game, but the cracks are beginning to show. An excellent core battle system, marred by some tedious areas and long battles.

Steam World Quest isn't a perfect RPG, but it's a damn good one. If you want some bitesized, simple card battling mechanics on the go, this is an excellent choice
Next Up :
Jade Order review - "An puzzling path of the warrior"

SteamWorld Quest: Hand of Gilgamech, the card-based RPG, is now available for iOS