In order to produce a follow-up to its popular Flash, iOS, and Android game Steambirds, developer Spry Fox has partnered with Halfbrick – the studio behind App Store hits such as Fruit Ninja and Jetpack Joyride.

The result of this collaboration is the tactical dogfighting sim Steambirds: Survival, which takes off for free on iPhone and iPad next month.

A turn-based aerial combat game set against the backdrop of a war-torn steampunk world, Steambirds: Survival sees you take control of an Allied pilot, fighting off successive waves of aircraft in a bid to buy time for under-fire British evacuees below.

Steamboats: Survival offers 64 missions at launch, with Halfbrick and Spry Fox promising free updates in the weeks after release.

There are also eight unique aircraft to choose from, each with its own strengths and weaknesses. Power-ups add a further layer of strategy, as downed enemy craft drop collectibles which are essential to survival.

Find out if you have what it takes to fend off the Axis Armada when Steambirds: Survival swoops onto the App Store early next month.

Check out the official trailer below in the meantime. 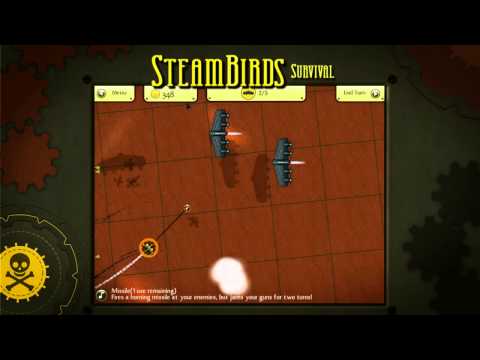 Gameplay footage for Steambirds: Survival on iPhone and iPad