Unique or not, it looks lovely

Star Renegades is a turn-based tactical roguelike RPG. Aside from having a long-winded genre Raw Fury and Massive Damage claim the game has an entirely new art style that they're dubbing 2DX – the X stands for extreme. Whether it's something entirely new or not, it certainly looks very beautiful.

The art style was apparently invented entirely by an artist popping the 2D art into a 3D space 'for fun'. The artist in question, named Bryan, then realised he'd created a lot more work for himself by creating this look for the game. It doesn't look massively new to me, I'd say it's incredibly detailed pixel art. Irrespective, it does look absolutely spectacular and I'm pretty much sold on this by aesthetic alone.

If you're more sensible than me and don't judge every game by a gorgeous visual style let me tell what Star Renegades is all about. It's a collaborative effort between Raw Fury and Massive Damage. You may remember Massive Damage as the creators of Halcyon 6, a game that we thoroughly enjoyed. 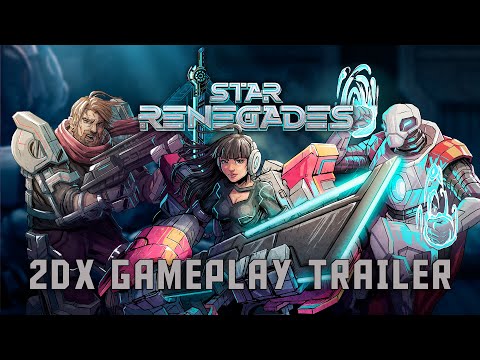 Star Renegades is a squad-based rogue-lite where you play as a group of rebels who are trying to overthrow a group called The Imperium. It'll be a long battle evidently as it'll span multiple generations, some of whom can be the offspring of your squad members if you foster romantic relationships between them.

Creating relationships, romantic or just being great pals, will give your squad combos that they can use in battle. This sounds very cool to me, it gives me a reason to explore social parts of a game that I'd usually ignore because it doesn't impact gameplay.

Star Renegades is set to be released at some point during Q2 2020. A more specific release date has not been announced yet but it will be available on Switch. There's currently no word on a mobile version of the game but we can find some hope in the knowledge that Halcyon 6 eventually found it's way into mobile devices.

Check out our news section to discover the latest, and greatest, games.
Next Up :
TerraGenesis: Operation Landfall, the sequel to the popular space sim TerraGenesis: Space Settlers, is out now on Android and iOS