Life is good when you've got sprite buddies by your side

X-LEGEND Entertainment's charming MMORPG Sprite Fantasia has officially launched this October 19th, and it’s a magical place to be. Right off the bat, you're thrust into this wonderfully wacky world filled with talkative crustaceans and giant pink blobs, and it's up to you to use your abilities to keep this lovable community safe.

As the spiritual successor of Grand Fantasia Online - the 2010 Bronze Awardee in the Best Online Game category and the only domestic game to win the Bahamut Game Award for three consecutive years - Sprite Fantasia has all the elements of the 13-year-old classic that fans have come to know and love.

The very first thing you need to do once you start a new game is to pick a class from among Warrior, Mage, Priest, and Archer. Each one has its own special skills and unique moves that can come in handy during battle, as well as branching ascensions into a higher class. And finally, you can pick your guardian sprite who'll accompany you on your grand adventure, because who wouldn't want to journey through life with a cuddly companion?

What makes Sprite Fantasia shine and stand out from your average MMORPG are its lighthearted storyline and hilarious cut scenes, reminding us all that we don't have to take life so seriously, especially during these difficult times. While there's no shortage of action-packed real-time battles here, the so-called enemies you fight may even make you feel sympathetic to their plight, as they can simply be misunderstood, misguided, or even hungry.

Adding to the feel-good vibes are the vibrant graphics and gorgeous 3D environments you can freely explore with your sprite, who also never fails to lighten the mood every time there's conflict. While you can simply roam around and marvel at the world (or fight monsters to grind and grow stronger), you can also accept fun quests from colorful NPCs to unlock further game mechanics. 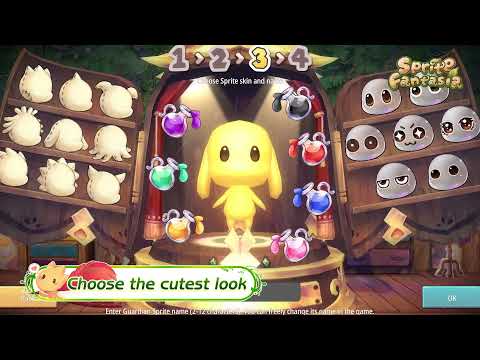 For instance, completing certain challenges in the dungeons or helping citizens in distress during the early parts of the game can help unlock your Mount, because why walk around when you can ride a bouncy fella to get from place to place?

Of course, when it comes to combat, just because everything looks bright and sunny doesn't mean battles pose no challenge at all. On the contrary, fights are exhilaratingly fast-paced and definitely adrenaline-pumping, as you'll have to use different combinations of your regular attack and your special skills to beat foes and aggro monsters around you.

You can equip lots of gear both for you and for your sprite, as well as attach Sprite Memory Cards to boost your attributes. The gacha system comes into play here, along with a pool for tons of different outfits you can customize your character's looks with.

Here’s where the magical Sprite Island comes in. In this cozy sanctuary for Sprite Messengers and Sprites alike, you can obtain tons of powerful weapons and equipment, valuable materials, and even fab fashion outfits as Sprite apprentices collect resources for you. As you level up your island, you can acquire more special buildings. You can also craft different kinds of furniture at the workshop, level up your island, and showcase your lovely home to your friends.

Overall, Sprite Fantasia comes as a welcome respite when you need to retreat to a vibrant world with an equally vibrant sprite friend. You can also participate in fun mini-games like racing challenges and tapping away at hungry meat-stealing sprites.

If you're eager to give it a go, the game has just launched, and you can download it for free from the Apple Store and the Google Play Store, available . worldwide in six languages (English, German, French, Thai, Korean, Simplified Chinese). It’s also available on Steam, and if you’re looking for a spooky treat this season, you can sink your teeth into the in-game Halloween event at launch to score some cool Halloween-themed rewards.

What's A Preferred Partner Feature?
From time to time Steel Media offers companies and organisations the opportunity to partner with us on specially commissioned articles on subjects we think are of interest to our readers. For more information about how we work with commercial partners, please read our Sponsorship Editorial Independence Policy.
If you're interested in becoming a Preferred Partner please click here.
Next Up :
World War Toons: Tank Arena - What to expect from this casual VR shooter

Sprite Fantasia hits the 500k pre-registrations milestone, hyping up the 3D MMORPG ahead of its launch