The Secret of Monkey Island was the big one. Whenever a new adventure game - retro or otherwise - appeared on the iPhone, it's song was lost in the white noise of, "Where's Monkey Island!".

But now that LucasArts's immortal point and click classic is out of the way, developers can reach a little deeper into the adventure archives to blow the dust off some other retro treasures such as Simon the Sorcerer.

Adventure Soft's 1993 fantasy fiction spoof magically appeared on the App Store last night, providing a pixel perfect adaptation of the DOS version courtesy of the popular ScummVM project. The benefit of it being a PC port is that it includes the full (though occasionally annoying) voiceover by Red Dwarf's Chris Barrie.

The game follows Simon and his dog Chippy after they find a spell book that opens a portal to a strange, fantasy world. The point and click adventure game steadily reveals an amusing storyline that spoofs a host of popular works including the Lord of the Rings, the Chronicles of Narnia and several salacious references to childhood tales like Jack and the Beanstalk and Rapunzel.

Adapted to work with the iPhone's touchscreen, Simon the Sorcerer also contains remastered music, which you can sample in the gameplay video below. Let us know what you think of this latest retro adventure conversion. 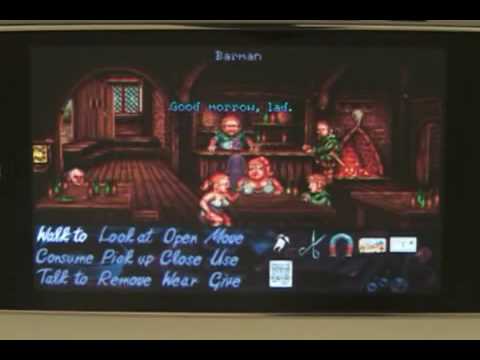