Eight of the world's top streamers are about to find out

Earlier today, it was announced that this Thursday, January 25th, Shadowverse will be streaming its Packapalooza to truly cement the fact that it's "the world's most generous card game". 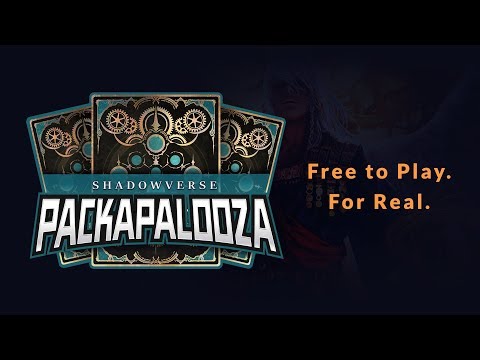 Throughout January eight top Twitch streamers, including Kripparrian and Brian Kibler, have gone back to the beginning. After discarding their current accounts, these competitive players have been challenged to build new decks from scratch using only what's available for free in the game.

That includes the 50 free card packs given to new players, various rewards for completing solo story mode missions, and other in-game freebies. It doesn't look like there's any sort of cash prize, but I absolutely adore contests like this.

It's exciting to be great at a game, but by stripping away all traces of familiarity and giving you the same resources as your fellow competitors, you've got nothing but your knowledge and skill to fall back on. I don't know about you, but that's always super interesting to watch.

Tune into the excitement on Twitch this Thursday at 1 PM, PT.

Shadowverse's Packapalooza comes just on the heels of the World Grand Prix announcement, noting that this year's winner will receive a cash prize of an incredible $1,000,000. 2018's looking like the game's biggest year yet, so we'll keep you updated with more news as always.