Netmarble has announced the epic conclusion of the main storyline for Seven Knights 2, its cinematic RPG that follows the events of the original Seven Knights. In Chapter 13, players can experience the last journey of the Daybreak Mercenaries and uncover Knight of Light Rudy and Phine’s destinies via gorgeous cut scenes and stunning closing credits.

The latest update for Seven Knights 2 also adds the Legendary + Hero Lord of Destruction Evan and Legendary Hero Nestra’s Incarnation Shane. Players can expect to craft the new Exclusive Equipment via a Hero’s Soulstone for welcome buffs on the Hero's skills. The new Eight Player Raid: Bad Blood has also been launched, letting players show off their might and mettle to clear waves of enemies using different configurations. Rewards from this new content include valuable materials to craft Exclusive Equipment. 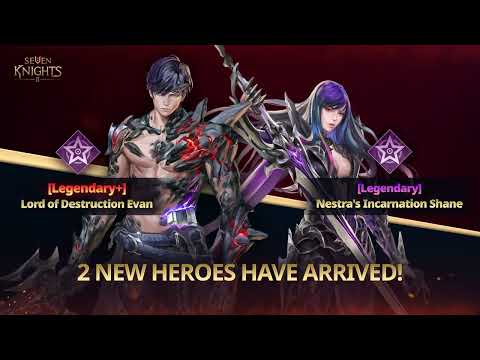 If you're keen on joining in on all the festivities during the last chapter of the game's narrative (plus the season of cherry blossoms field exploration event), Seven Knights 2 is available to download on the Google Play Store for Android devices and on the iOS App Store. It's a free-to-play game with in-app purchases. It offers multi-language support in English, Japanese, Simplified Chinese, Traditional Chinese, Thai, Portuguese, Spanish, German, Italian, French, Russian, and Indonesian.

You can have a look at the trailer above to get a feel of the March goodies in store for you this month, or visit the official website for more info. You can join the community of followers on the official Facebook page to stay updated on all the latest developments as well.

Are you on the lookout for more similar titles that will put your skills to the test on your mobile device? Why not take a gander at our list of the best RPGs for Android?

Next Up :
Genshin Impact's Divine Ingenuity quest goes live and allows players to create their own traversal challenges