Sdorica - Sunset is an interesting mix of ideas. It takes concepts from a whole bunch of free to play RPGs, and bashes them into something that's got its own sort of shape.

There's some puzzling, some violence, plenty of currencies and bits and bobs to get, and a gorgeous art-style that's dripping with quality.

It's not going to be to everyone's taste, but if you like the sort of deep distraction that mobile games can deliver then there's a lot here to like.

Essentially the game is a match-stuff RPG, but there's a bit more, and a bit less, going on than that. You're controlling a party of fighters who are making their way through a world in turmoil.

Different characters perform attacks depending on the colour of the gems you match. Except they're not really gems. And rather than aiming for matches of three or more, here you can tap a single coloured blob, connect two in a straight line, or four in a square.

There's actually a decent amount of strategy to the fights here. You need to choose which creatures to attack, and matches of different types perform different moves. Your healer will dish out some HP if you tap one light, but attack if you combine two. 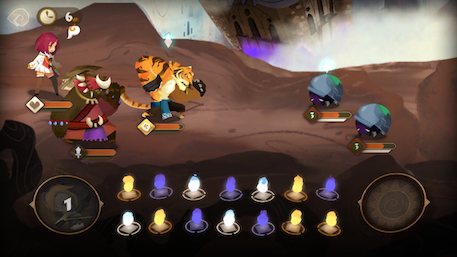 Counters show you when your foes are going to attack, and prioritising is the key to success. The game isn't shy when it comes to tutorials, but they're presented in an interesting way, and actually offer a decent amount of challenge in and of themselves.

Often you're going to be confronted by a baffling number of menus, items, currencies, and much more beside. This is one of those games where you need to pay more attention to the meta than you do the actual gameplay.

Only just though, and that makes for quite a refreshing change. Plus everything here looks gorgeous. It's shiny in all the right ways, reasonably well written, and the character designs are spot on.

There are going to be people who balk at everything that Sdorica - Sunset has to offer, and it's understandable. But the game does everything it sets out to do really, really well.

If you're even slightly curious to see what the game has to offer then I'd suggest picking it up. There might be a bit of disappointment here and there, but for the most part you're going to have a blast.

There's a few problems here and there, but for the most part Sdorica - Sunset is well worth checking out
Next Up :
Happy Game review: "Don't worry, be happy?"