Another month, another Kemco release. Soul of Deva is the latest addition to the developer's already sizeable JRPG back catalogue, and it's currently on sale at special launch price of £3.99 / $3.99, before going up to a whopping £8.99 / $8.99 in due course.

Soul of Deva follows the adventures of Sania, known as the 'Savior', as she travels through demon-infested lands to far-off Raglis.

A young woman with mysterious powers, Sania will meet, fight, and recruit a variety of human, demon, and half-demon folk on her journey; with the group levelling-up and acquiring new powers as they go. 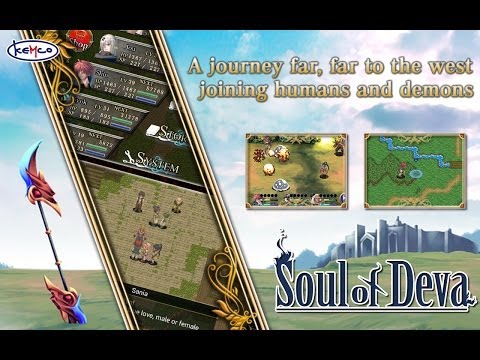 Gone are the 3D animations and voice-acting of Kemco's previous game Alphadia Genesis, but in their place is the ability to move team members around the battle arena and target specific zones instead of individual enemies.

Summonable elements such as walls and bombs are used to gently influence where you move and when. In a game that might otherwise be accused of lacking originality this is a nice addition, providing plenty of scope for tactical choices.

Whether you're a fan of JRPGs or just curious about Kemco's output, head over to Google Play [here] and pick it up now while it's on sale.